What is happening to Malaysia’s rainforests?

Malaysia has pledged to maintain at least 50% under forest and tree cover (“sebagai hutan dan liputan pokok”) in the 12th Malaysia Plan and as its Nationally Determined Contribution at COP26. This includes permanent reserved forests (PRFs), state land forests (SLF) and totally protected areas (TPA/PA). In 2016, Malaysia’s Forestry Department reported 18.24 Mha (million hectares) or approximately 55.2% of the total land area of Malaysia was under forest cover. However as Dr. Lim Teck Wyn, Managing Director of Resource Stewardship Consultants Sdn Bhd, asks “What is to stop all the natural forest from being cut down and replaced with plantations?” as “forest and tree cover” is not properly defined and may refer to plantations.

According to Global Forest Watch in 2016 reported that 185kha of primary forest was lost. From 2010, Malaysia had 20.3Mha of natural forest, extending over 87% of its land area and in the span of a decade by 2020 has lost 122kha of natural forest, equivalent to 85.2Mt of CO₂ of emissions. In short, Malaysia is experiencing some of the highest deforestation rates in comparison to other tropical countries in the world. 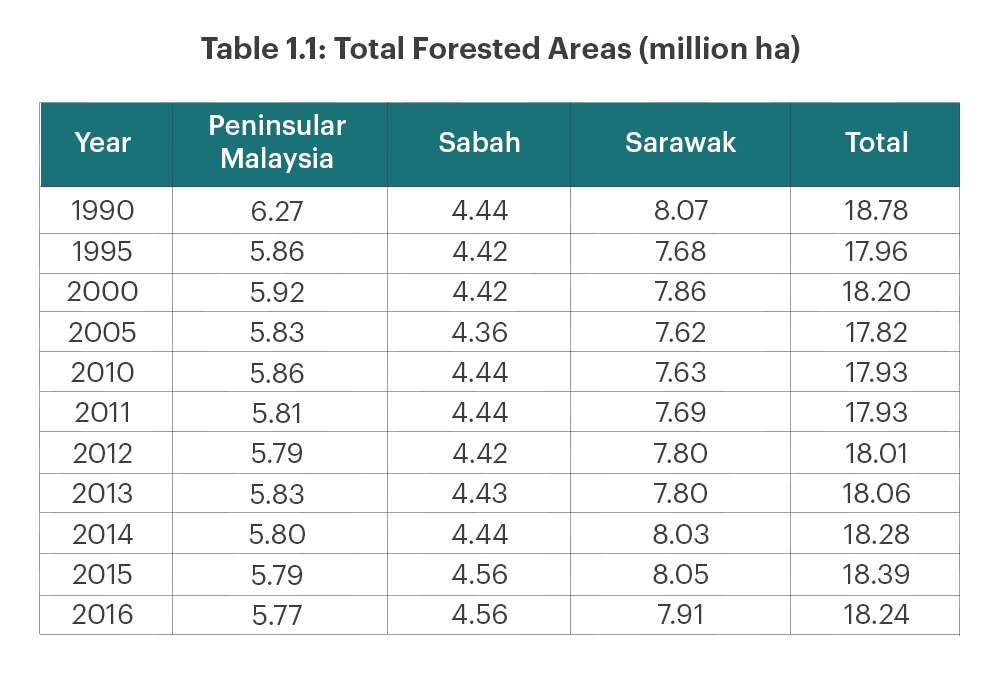 Sabah and Sarawak witnessed 56% of all tree cover loss in Malaysia between 2001 and 2020 with Sarawak being the state with the most tree cover loss at 3.04Mha compared to the state average of 524kha. Other studies report the loss of Borneo’s old-growth forest between 1973 and 2015 was estimated at 18.7 Mha (14.4 Mha and 4.2 Mha in Indonesian and Malaysian Borneo). With plantation industries as the main driver of deforestation in Malaysian Borneo, the industrial plantations expanded by 9.1 Mha (7.8 Mha oil-palm; 1.3 Mha pulpwood). From 1973 to 2015, the total forest area converted to plantations in Sabah and Sarawak respectively were 1,212,447ha and 1,476,957ha. Not to mention approximately, 83,362 ha of forest have been permanently flooded by hydroelectric power dams of Bakun and Murum between 2011 and 2014 in Sarawak. [1] 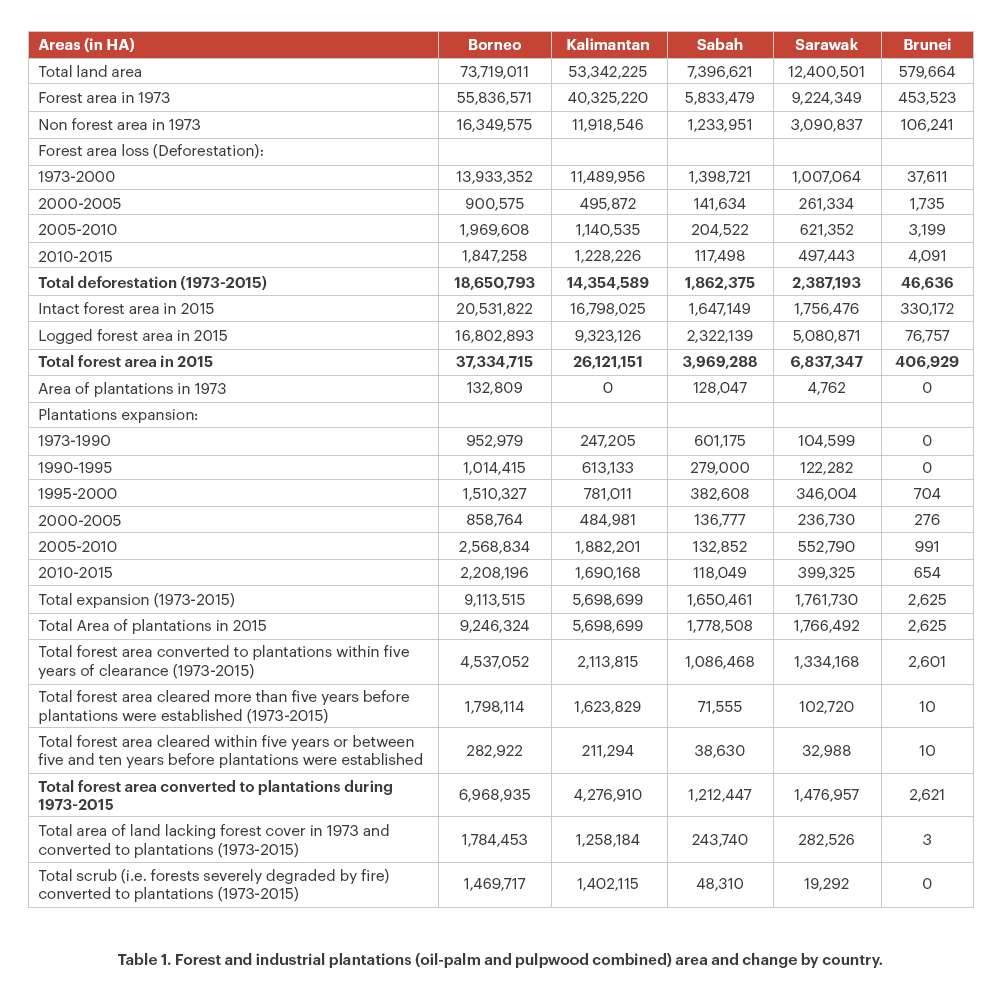 Malaysia also has an extremely high rate of peat swamp deforestation that accounts for the high deforestation rates nationwide. Peat swamp forests are “the accumulation of partially decayed organic matter, called peat, which is formed from plant debris under waterlogged conditions”. [2] They are typically surrounded by lowland rainforests or salt-water mangrove forests near the coast. Tropical peatlands also act as important carbon stores and their deforestation has led to huge increases of carbon dioxide into the atmosphere. Currently greenhouse gas emissions (GHG) from tropical peatlands that have been deforested and converted for plantation industries are not considered in GHG emissions by the UN Framework Convention on Climate Change (UNFCCC).

Many countries in Southeast Asia are home to extensive peat swamp forests but have been regarded as wastelands that must be converted for more productive land use. From 2000 to 2010, 55% of peat swamp forests in Sarawak were cleared at an average yearly decrease rate of 7.7%. This decrease resulted in the loss of 45% of the entire Malaysian peat swamp forests. [3] The same goes for loss of mangrove forests, another major carbon store, due to the development of oil palm plantations in Malaysia and Indonesia which are some of the highest in Southeast Asia. Richards and Friess (2016) report Malaysia had deforested 18.846 ha or 2.83% of its mangrove forests from 2000-2012.

Who stands to benefit from Malaysia’s deforestation?

The forest policies of Peninsular Malaysia, Sabah and Sarawak are developed independently of each other. An Interim Forest Policy was first drawn up in 1952 and officially adopted as the National Forestry Policy in 1978 (amended 1992) in Peninsular Malaysia while in Sabah and Sarawak, the Sarawak Forest Ordinance 1954 and Sabah Forest Enactment 1968 was implemented. [4] Although recently a new Malaysia Forestry Policy was approved at the 78th National Land Council meeting in January 2021, making it the first policy document relating to forest matters that covers all three regions.

The Chatham House’s Forest Policy Assessment of Malaysia from 2010 to 2018 noted there is no national action plan for tackling illegal logging and no publicly available government-conducted review of the causes and severity of illegal logging. Nor are there laws which require prior informed consent procedures or stakeholder consultations for local communities with respect to logging interests and rights to be carried out. Negotiations between Malaysia and the European Union (EU) on the EU-Malaysia Forest Law Enforcement, Governance and Trade (FLEGT) Voluntary Partnership Agreement (VPA) began in 2007 and have stalled since 2014 given that the Sarawak state government has refused to join the pact. Sarawak has independently developed its own Sarawak Timber Legality Verification System (STLVS) to meet market requirements outside of the VPA context in 2016.

However, despite policies formed at the federal level, the state governments have jurisdiction over their respective land, state forest policy and forest resource use. Forest policies must be in line with those formulated by the National Land Council (NLC) however individual states are free to amend their state forestry enactments as they see fit and are responsible for regulating forest exploitation and management. As forestry is a major source of revenue for state governments, places like Kelantan and Pahang with the most forest cover have earned over RM 147 million and RM 130 million respectively. Macaranga reported that in Peninsular Malaysia the Menteri Besar is usually in charge of the state’s land and natural resources portfolios, and has the final say on forest matters such as on gazettement and finalising change forest classification and use. Menteri Besar is the head of the state government typically translated as “Chief Minister”. As such “forests are not just natural resources but also political assets. Multiple studies of historical and current forest change in Malaysia have associated forest use with political power dynamics.”

Nevertheless, there are groups working towards reforming the current forest governance in Malaysia. Take for example the coalition “Pertahankan Hutan Simpan Kuala Langat Utara (PHSKLU)” encouraged sending pressure emails to the Selangor Menteri Besar and protest on social media. With public outcry and media attention, the Selangor state government decided to reverse the degazettement in early September 2021. Another group called Malaysian Youth For Forest Action (MyHutan) is a youth movement dedicated to mobilising sustainable financing for forest conservation in Malaysia. Advocating for policies like Ecological Fiscal Transfer (EFT) or Payment for Ecosystem Services (PES) that help protect forests and manage Protected Areas (PA) in the country, MyHutan believes that the way forward is the involvement of both “federal government and state government to have mutual participation and partnership in reaching Malaysia’s ambitious goal to protect biodiversity […] these collaborations must involve meaningful stakeholder engagement, policies and legislations driven by science and enforcement that is stricter.” 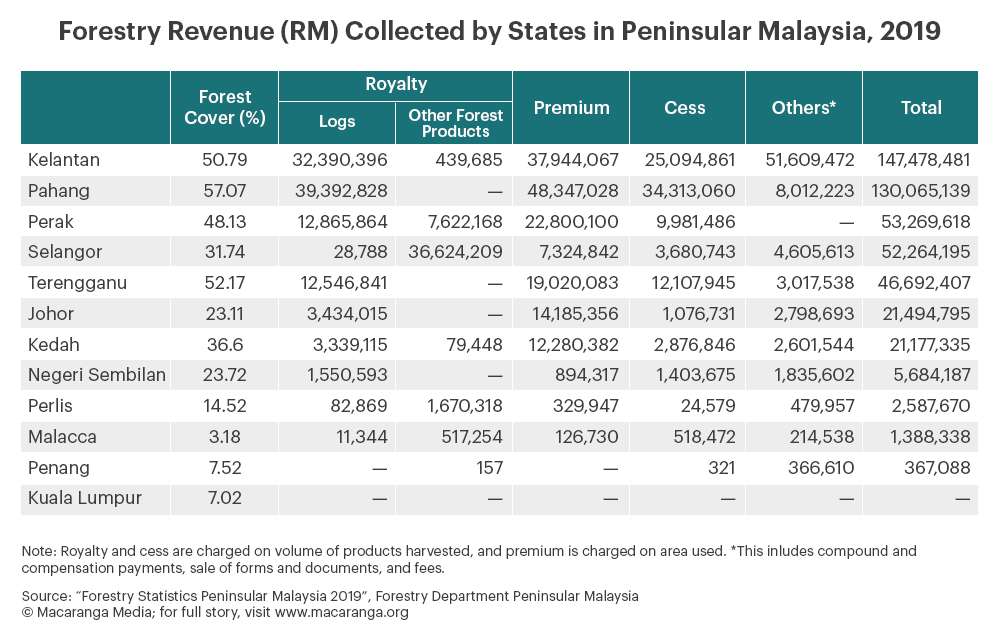 Special thanks to Law Yao Hua for his help on this fact sheet.