QUEZON PROVINCE, Philippines — Because she needs to send her two children to school, Joan Avitria is willing to endure the worsening high tide-induced flooding in the only public school in Luctob, a small barangay in Macalelon, Quezon.

A few blocks away from Avitria, Glenda Dedoro, who has lived in the barangay since 2013, is also determined to send her four grandchildren to school even when the campus is covered by water.

Both women have accepted that they will have to fetch the students from school or wait for them outside the classroom to make sure they can come home safely when floods hit again.

Luctob residents have worse problems than soggy school grounds as the high water reaches homes too.

Avitria’s home is on stilts but can no longer keep the water out as the flooding has steadily worsened of late.

“This scenario is very usual in our barangay but this is the only time that flooding has been this bad,” Avitria said in Filipino. In her 36 years of living in the village, she has seen flooding reach homes that floods used to leave untouched.

“Before, even if there is a high tide, some homes here were still spared.”

It has become part of the family’s routine to make sure important items are kept elevated to keep them safe from flood waters that sometimes reach knee level.

She said the village gets flooded around once a month, with the waters taking three to four days to subside.

“I cannot finish cooking or doing the laundry because of the water,” Dedoro said, adding that her children don’t mind the flooding as much because it turns the village into “a big swimming pool.”

According to Climate Links, the Philippines is one of the countries deeply affected by “sea-level rise, extreme weather events, rising temperatures, and extreme rainfall” because of its vast coastlines and a large population that is exposed to natural hazards. 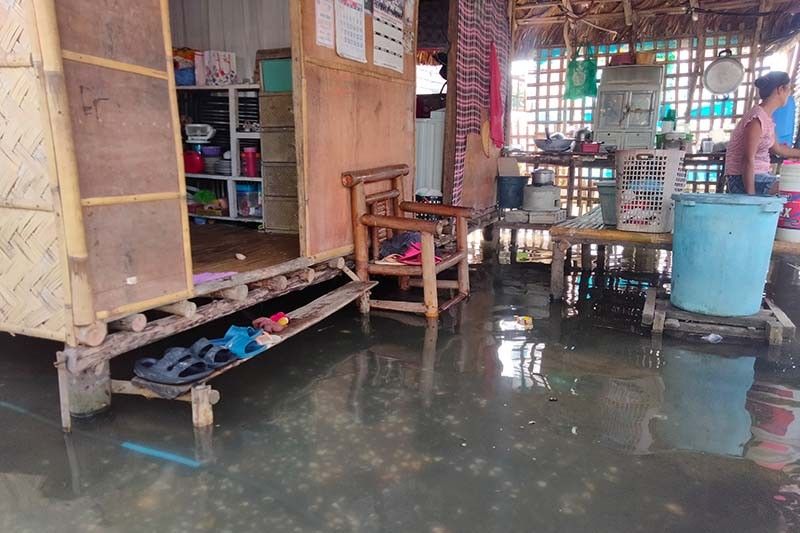 Macalelon, the town where Avitria and Dedoro’s barangay is located near the river and sea and on the path of typhoons from the Pacific Ocean.

Quezon province itself was where Super Typhoon Karding first made landfall earlier in September before barreling across Luzon and destroying crops and structures in its path.

The province wasn’t spared from the wrath of typhoons Rolly and Ulysses in 2020, either as they forced the local government to evacuate the residents in barangays like Luctob.

Among the worst to hit the province was Typhoon Glenda in 2014, which left 26 people dead, including two from Luctob.

According to a flood mapping survey of the Macalelon River done by the University of the Philippines – Diliman (UP) and Mapua Institute of Technology in 2017, close to 50% of the town’s area could experience flood levels of less than 0.20 meters within five years.

Three schools in the Macalelon floodplain are also projected to experience low-level flooding while five are expected to see medium-level flooding.

The lone public school in Luctob was not identified in the mapping survey as flood prone, but residents know that flooding is a reality whether from rain or because of rising tides. 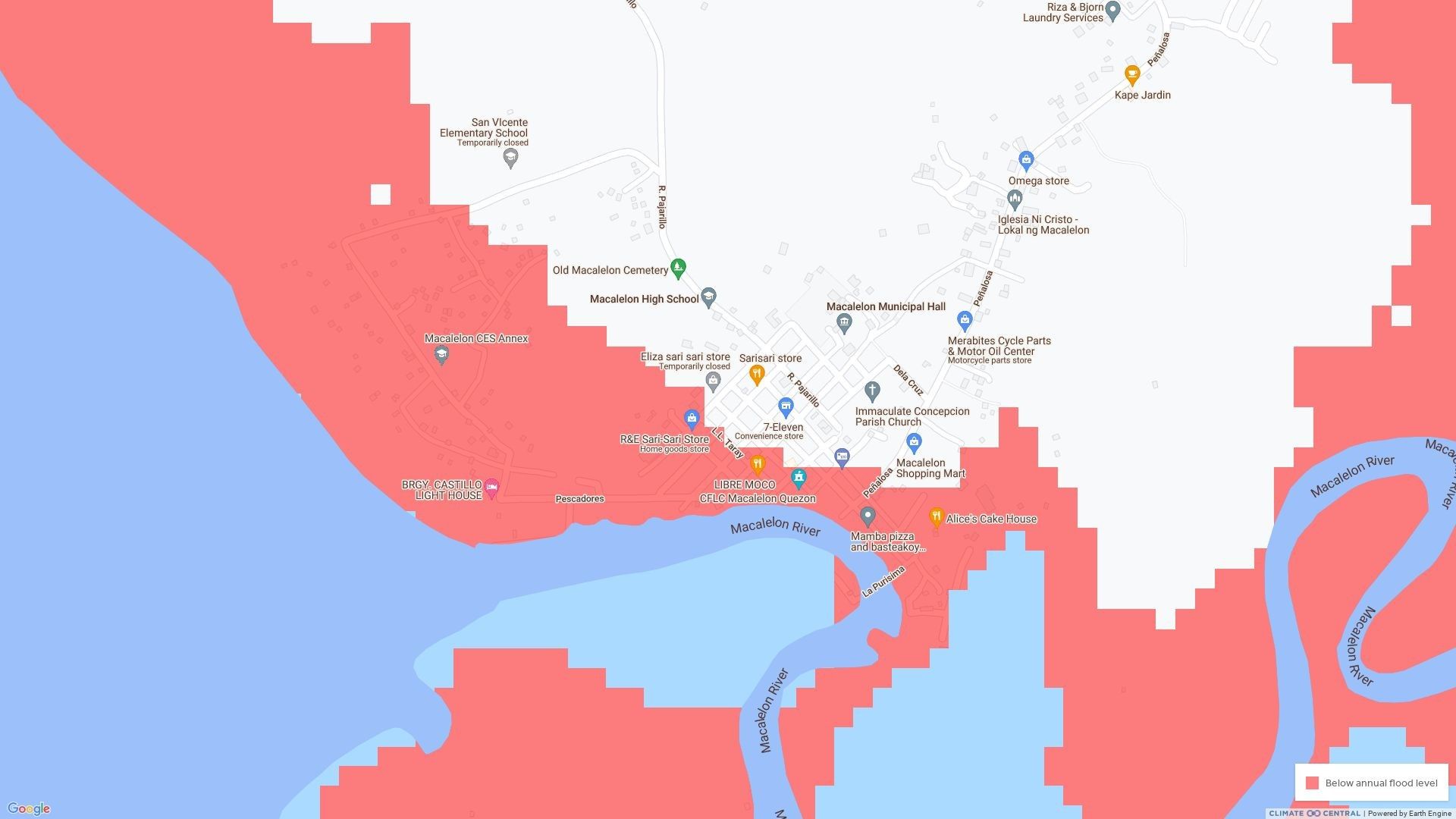 According to Climate Central’s coastal risk screening tool, much of the town’s area near the sea and within the vicinity of the river are in an area that could be a flood zone by 2050.

But future flooding is not a new story, and not one that Macalelon alone faces.

Laoag City in Ilocos Norte, Baler in Aurora, Boracay in Aklan, Iloilo City in Iloilo and Roxas City in Capiz are also on the list of places that will see worse flooding in the next three decades.

In an interview, Mahar Lagmay, a Filipino geologist and executive director of UP NOAH, said rising sea levels could greatly affect the livelihoods of people farther away from coastal areas.

“If the sea levels continue to increase, storm surges could reach more land areas,” Lagmay said, noting that would be bad news for agricultural areas.

“If the lands made for rice fields and vegetation become salty, the freshwater land could not cope with the salty water.”

Associate Professor Mayzonee Ligaray from the Institute of Environmental Science and Meteorology of UP Diliman agreed that effects of rising sea levels will be felt even in inland areas.

“If the sea level rises continuously, the flood waters would slowly run down as it reaches places far from the coast,” Ligaray noted, adding land used for agriculture can be prone to seawater infiltration that could lead to contaminated groundwater.

According to Climate Central, more than 150 million people across the world could be affected by rising sea levels.

For archipelagos like the Philippines, that could mean widespread migration from coastal areas, Ligaray said.

“The migration will definitely affect the non-coastal communities because basic necessities and facilities might not be enough for people,” she said, noting that residents of coastal communities would also lose their livelihoods when they move.

That means the government should consider employment and livelihood when relocating communities from flood-prone areas.

Apart from economic impact, migration will also affect communities and their cultures. “Everyone should care about the rising sea levels,” she said.

Avitria and Dedoro said they haven’t heard from their local government unit about plans to address the flooding but are hopeful that these exist.

Deodoro said they asked candidates in the May elections for help in building elevated pathways but the water has been rising even before these are being built.

“We need a higher foundation for our homes because our personal budget wouldn’t suffice,” Dedoro said. “We’re just poor.”

Meanwhile, Avitria also appealed to the local government, saying that they must raise the floor of the barangay’s lone school for the children’s safety and to make sure classes are not disrupted by flooding.

In the meantime, Lagmay said, there are two ways to address the rising sea levels: climate change mitigation and adaptation.

“[Mitigation] means you have reduced global output of carbon and greenhouse gas emissions so that ice in the polar caps would not melt and (that would) decrease sea level rise,” Lagmay said, explaining further that adaptation means projecting the impacts of climate change and addressing local risks in a community.

According to Ligaray, LGUs must identify vulnerable areas and make people aware of how to respond to them. Local governments must also have plans in place to relocate communities if necessary.

On a larger scale, the national government must look into local adaptation plans of different places to come up with policies that are tailored to the risks that communities face and the potential solutions to address these.

Ultimately, Ligaray said, governments on the local and national levels must recognize how big corporations contribute to the worsening climate situation and acknowledge that they cannot conduct business as usual.

“Our individual carbon footprints are minute compared to big industries and corporations,” she said, adding she hopes that the country will craft policies that will rein in big businesses and help make sure the village of Luctob will not sink deeper into the sea.