What you need to know

“The quarrying is to blame, no doubt about it. It’s always been like this, but we live in this area because we have nowhere else to go,” said an inspector for the Municipal Environment and Natural Resources Office.

Since early January, storms and heavy winds have ravaged the Philippines, causing flooding and landslides on all three major island groups. President Ferdinand “Bong Bong” Marcos Jr. has placed the provinces of Northern Samar and Misamis Occidental, along with ten municipalities, under a “state of calamity.” 13 of 18 regions have been hit by over a thousand incidents of flooding and severe winds according to the National Disaster Risk Reduction and Management Council (NDRRMC).

The NDRRMC also reported at least 30 deaths, while nearly 400,000 people have been affected by displacement, damaged houses, infrastructure, and agriculture. The Department of Social Welfare and Development also recorded 1.8 million individuals affected by flooding and rainfall in Eastern Visayas, the Zamboanga Peninsula, and Northern Mindanao. If counting the holiday period, the NDRRMC has recorded 33 deaths since January 2. This is on top of the 52 casualties due to weather calamities during the last two weeks of 2022.

The economic damages are staggering as well, estimated at ₱181.6 million (US$3.3 million) and ₱373.9 million (US$6.9 million) for infrastructure and agriculture respectively.

Over the past decade, the Philippines has lost more than US$10 billion due to climate-related destruction, according to Rafael Mariano, chairman of the Kilusang Magbubukid ng Pilipinas (Peasant Movement of the Philippines), or KMP.

The DSWD recorded 1.8 million individuals affected by flooding and heavy rainfall in Eastern Visayas, the Zamboanga Peninsula, and Northern Mindanao. The government has given some ₱88 million (US$1.6 million) in aid — cash, food, and other items

No typhoon has entered the Philippines recently. But the combination of torrential rains and powerful winds has battered the archipelago. The state expects more of the same, or even more intense damage when typhoons and tropical cyclones arrive.

The Philippine Atmospheric, Geophysical and Astronomical Services Administration (PAGASA) said, “More tropical cyclones (TCs) are entering the Philippine Area of Responsibility or PAR (PAR) than anywhere else in the world. With the average of 20 TCs in this region per year, with about eight or nine of them crossing the Philippines.” It also warned the public to expect up to six tropical cyclones until April 2023, the last major one being Tropical Cyclone Nalgae last October.

Climate activists believe that a combination of a lack of preparedness, the neglect of weather utilities, and the pursuit of destructive mining and quarrying has severely compromised the Philippines’ ability to cope with natural disasters.

A child looks on as the concrete wall protecting his home from the rising seas has diminished, Rodriguez, Rizal, Philippines.

Agham, a science advocacy organization in the Philippines, noted how the Marcos government has reduced the country’s weather forecasting budget by 22%.

“With the increasing threats of climate change President Marcos Jr. said that this is included in his top priorities. Yet he cuts the budget on departments that address this issue,” the group said.

Climate activists from the Kalikasan (Environment) People’s Network also noted that some of the areas impacted have been compromised by environmentally damaging developments such as mining, which worsen the impacts of heavy rain.

Residents of Brooke’s Point in Palawan, one of the locations within the declared a state of calamity, have expressed concern about the operations and exploration of two mining companies in their area.

“The climate crisis is here and now, yet Marcos Jr. is still humming the same tune of business-as-usual — that is, investments in destructive projects and fossil fuels, with little to no action ensuring communities become genuinely resilient,” said Bonifacio, the group’s chairperson.

Lucy Castillo, a social housing project resident in Rodriguez, Rizal is afraid of what the New Year will bring if the effects of quarrying in her province are not mitigated. 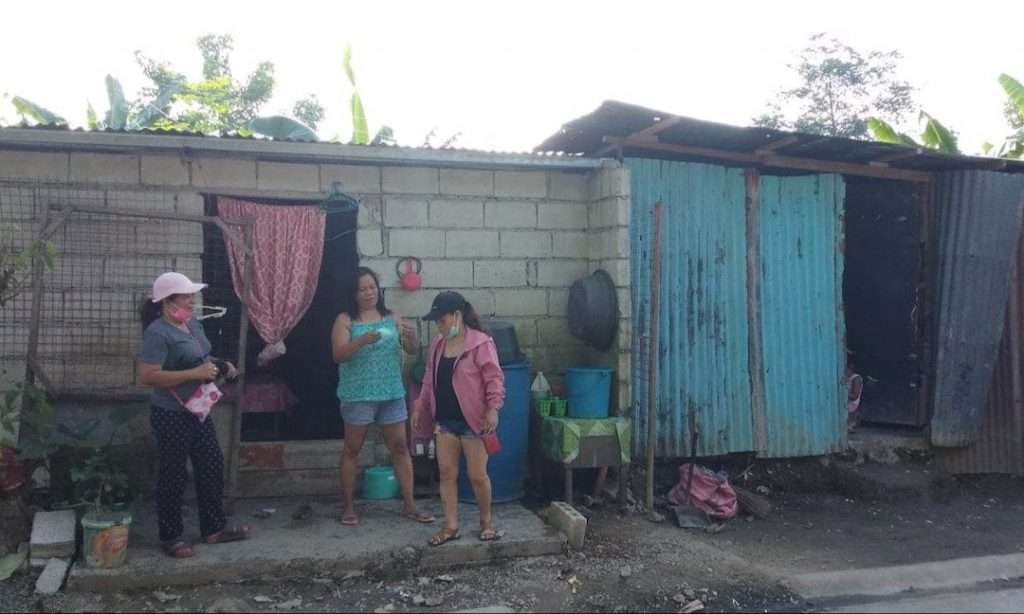 Castillo stands outside her home with neighbors in Rodriguez, Rizal, Philippines.

Rizal province was once shielded by the Sierra Madre mountain range, part of the country’s natural barrier against destructive east winds. However, years of quarrying have compromised parts of Sierra Madre in Rizal province just outside Castillo’s home. Where once a mighty and towering mountain stood, only its ragged and dusty remnants can be seen.

Her area has seen periodic floods and she says it is difficult to evacuate around six or seven times a year. Amid the latest rounds of rains, she says there was already an attempt by many of her neighbors to evacuate. The sea wall that separates her community from the nearby river has been severely eroded by the currents of the rising water levels, making them more vulnerable.

During the 2020 typhoon Vamco, nearly 8,000 houses in the town, all from low-income areas, were submerged, marking the worst flood since the housing project was built in the late 90s.

“The quarrying is to blame, no doubt about it. It’s always been like this, but we live in this area because we have nowhere else to go,” Castillo told The News Lens.

Castillo works as an inspector for the Municipal Environment and Natural Resources Office or MENRO. Ironically it’s her job to fend off illegal quarrying activities, but she concedes that those with permits are far too many and have completely changed the physical landscape.

Quarrying activities are routinely suspended and resumed, depending on the gravity of weather conditions. The last suspension came in June 2022. But Castillo says the town needs a more permanent solution.

“Every year we have more typhoons or heavy rains. We never know which one will be the last one we see. If nothing is done about the ‘shaved’ mountain, one day our town will just be a cemetery,” she said.