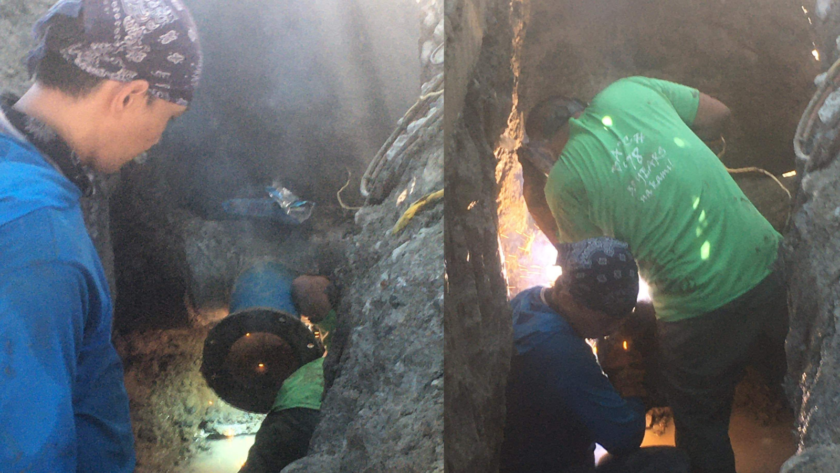 Given how political and business interests have aligned themselves with the current administration, it is uncertain how long proverbial faucets will have to be left running to reach clarity on the issue of water privatization.

MANILA – These days, Berlita Ante, a senior citizen and a local leader of a neighborhood association in one of Bacolod City’s poor, wakes up very early every day to fill up several barrels of water for her family’s use. If she fails to do so, her family would have no water to use for the entire day.

While there is water from the faucet, it becomes murky brown by 4:00 a.m. “It is like seeing coffee come out of our pipes,” she told Bulatlat in a phone interview.

She would then allow the faucet to run for at least 45 minutes until the water clears. “This can happen more than once a day. It’s why our water bills are so high.”

In 2020, Primewater, a company owned by one of the country’s richest and former senator Manny Villar, acquired the Bacolod City Water District (Baciwa), which provides water services to nearly half of the city population.

“Before Primewater, we used to buy water by the container. But when Primewater came in, they offered promos and discounts. But in the end, we ended up paying more,” said Ante.

Privatization of water services is not new in the Philippines.

In 1973, the late dictator Ferdinand Marcos Sr. signed a presidential decree that created the Local Water Utilities Administration, a government-owned and controlled corporation tasked to provide loans for the promotion and development of water services in the provinces.

The privatization of water continued in the succeeding administrations, including the signing of Executive Order No. 279 by former President Gloria Macapagal Arroyo that reduced budget allocations for water boards being run by local government units. This, according to the Water for the People Network, has forced them to either go for corporatization or, eventually, privatization.

In the network’s previous studies, the privatization of water led to 357.6 percent and 414.4 percent rate increases for Maynilad and Manila Water, two of the major water concessionaires in the country, from 1997 to 2007.

The favoring of private water concessionaires can also be seen in joint venture agreements, similar to the 1997 private contract crafted by the World Bank, through the International Finance Corporation.

As of 2018, the Water System Employees Response (WATER) said that at least 83 out of 584 water districts in the country have been privatized.

In Bacolod, Primewater officials earlier vowed that the joint venture agreement with Baciwa will “improve the water supply for our existing and potential customers” and that they are committed to the people’s “greater accessibility to water.”

Their consumers and previous employees disagree, stressing that the privatization and the increased costs did not translate to better services.

Leny Espina, chairperson of the Bacolod Employees Union (BEU), said that while there was no water rate hike, their water bills increased because “households would normally have to leave the faucet running for hours just to get rid of the turbidity and see some clean water.”

She attributed this situation to Primewater’s possible neglect of maintenance operations.

The additional 12-percent tax on consumers that Primewater imposed also became an additional burden to the Bacolod’s poor.

Primewater also took over the water district in San Jose Del Monte, Bulacan in May 2017. Now, residents complain of constant water interruptions, and turbidity, resulting in increased water bills from P300 ($5) a month to almost P500 ($9).

Irregularities in the joint venture agreement?

Critics have described the 25-year joint venture agreement between Baciwa and Prime Water as “hurried” and “without proper study.”

Former employees also decried the impacts of the joint venture on their employees as they shift from government to private employees. Permanent employees, too, will have to resign and go through the re-hiring process.

The COA has also flagged the joint venture agreement, saying that it did not abide by the proper procedures set in Presidential Decree 198 and thus “the interest of the government is not fully secured and protected.”

It also observed that “there was no feasibility study or business case/pre-feasibility study of the project prepared” ahead of the JVA. The COA then urged the Water District to “address the complaints on the increase in water bills and speed-up the confirmation on the collection fees deducted by PrimeWater.”

“The contract itself is highly disadvantageous and onerous. There are no additional investments or capital, no new water sources. We had one of the best water utility companies. This wasn’t a takeover, it was more like a handover,” Wilson Gamboa Jr., a city councilor, said.

Reggie Vallejos, a Development Studies professor at the University of the Philippines and Water for the People Network spokesperson, said that Primewater may have used its “political muscle to leverage deals with city governments.”

The Villar family is seated in key government positions. Prior to Mark Villar’s senatorial bid, he sat as former President Duterte’s public works and highways secretary, while his mother Sen. Cynthia headed the Senate Committee on Public Utilities.

Political and family ties, too, bind the Villar family to local politicians.

Under the new administration, Marcos Jr is seeking to regulate the use of water resources by establishing yet another executive department.

Espina, however, said that it may only compound the needlessly complex bureaucracy associated with the utility. ”What the government should instead do is to provide support to small water districts.”

Groups are also pushing for the passing of House Bill No. 7962 (Anti-Privatization of Water Systems Act) which was filed in November 2020 by former Bayan Muna Rep. Ferdinand Gaite.

The bill seeks to “review the continuing privatization of water services — a vital resource and basic need of the Filipino people — considering the negative impact on the rights of the people to safe and affordable water.”

Given how political and business interests have aligned themselves with the current administration — apart from the Villars in the Senate, Rep. Camille Villar represents clan bailiwick Las Piñas at the House of Representatives where she is deputy speaker — it is uncertain how long proverbial faucets will have to be left running to reach clarity on the issue of water privatization.

The BEU, on the other hand, continues to engage local officials to put a stop to the joint venture agreement on Baciwa. Last month, a city councilor passed a resolution that seeks to compel Primewater to answer to queries on their reported poor services.

Another group, Amlig Tubig, has also filed an appeal before the Court of Appeals to seek the nullification of the joint venture agreement.

Meanwhile, Ante is pondering how much longer the Bacolod’s poor can cope with Primewater’s poor service. “I have six children and one of them is a lineman for a telecommunication company. Every payday, we prioritize paying our water and electricity, more than food or medicine. Because they would cut our line if we fail.”