This story was supported by Climate Tracker Asia

MANILA, Philippines — For Renato Palanca, a resident of Linapacan, Palawan, the benefits of the country’s largest producing gas field are not for locals.

The fifth-class municipality is one of the towns of the Calamianes group of islands and is located within the coverage of Malampaya deep water gas-to-power project’s existing service contract.

“The impact [of the Malampaya deep water gas-to-power project and its foundation] is not felt in the community. Certainly not in the municipality, not in the village, and especially there at the poblacion of San Miguel,” the 63-year-old Palanca said.

This, despite the training seminars conducted by Malampaya Foundation, Inc. (MFI)—the development arm of the joint venture of the Malampaya project—in the last several years. 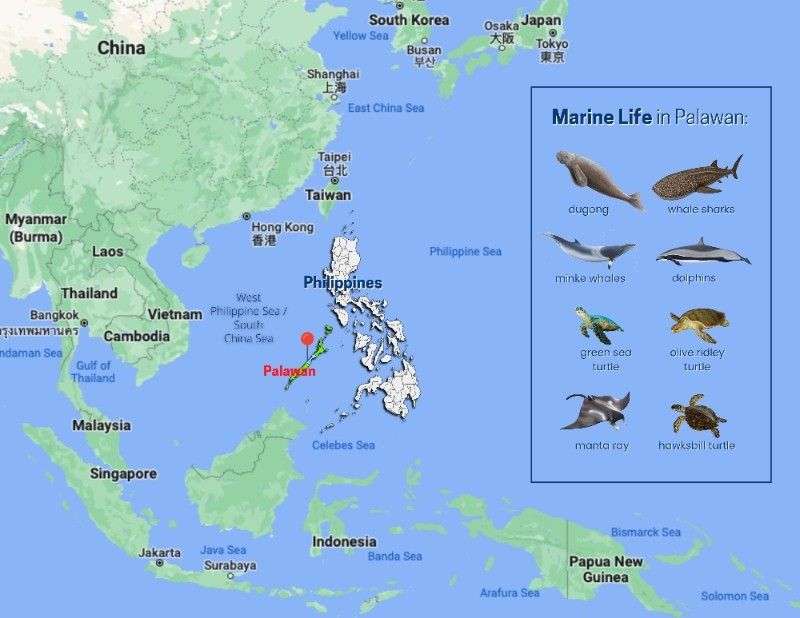 Map of Palawan with insets of migratory marine species that nest in or migrate to parts of Palawan that might get affected if there were to be a gas leak.

MFI Chair of the Board Rufino Bomasang said in his book “From Gathering Firewood to Managing Energy Resources” that the foundation “has substantially uplifted the lives of fisherfolk in Palawan, Mindoro and Batangas,” among those that “could be potentially impacted by the Malampaya project.”

By 2015, the foundation had trained over 4,000 individuals in various construction skills, Bomasang added.

Malampaya’s pipeline passes through barangays San Miguel and Decabayotot in Linapacan, but the town does not benefit from the field’s gas supply, Linapacan Mayor Emil Neri said. 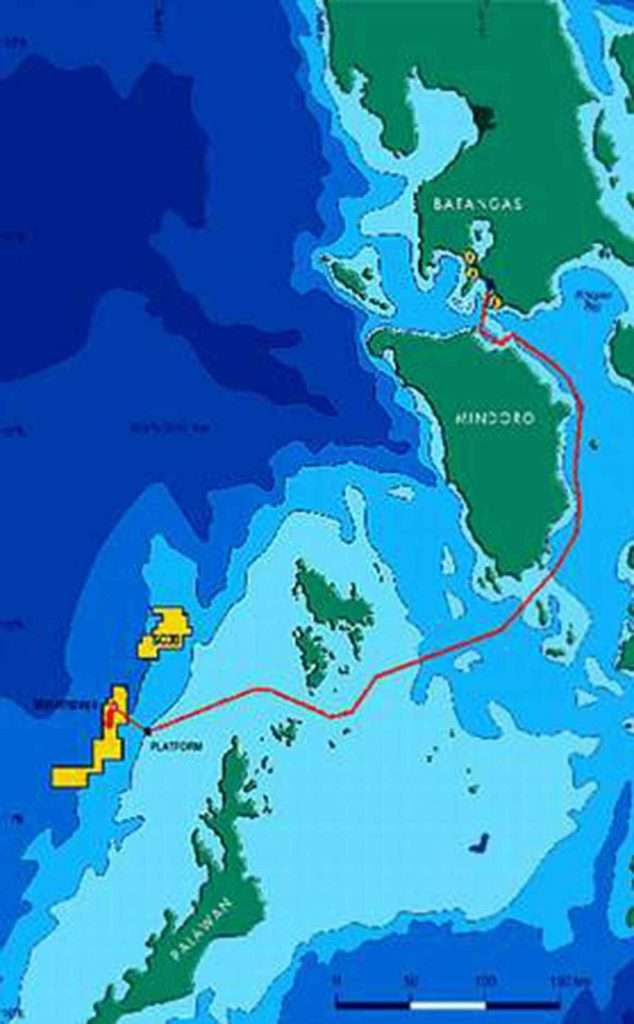 This is the map of the deepwater gas-to-power pipeline, from Palawan to Batangas. The pipeline passes deep in the sea between two barangays of Linapacan: San Miguel (south) and Decabayotot (north).

Palanca said it would have been much better had the Malampaya consortium just paid taxes—or if not, at least had paid for mayor’s permits—to the local government. Then, funds from these could have been channeled to the LGU to deliver projects that would uplift the lives of the fisherfolk and their families.

Palanca served as a barangay captain and member of the municipal council.

According to Neri, the Malampaya pipeline “goes through our municipal waters” without a mayor’s permit. The permit for the pipeline was secured in Batangas where it ends, the mayor added.

“Malampaya has nothing to do with Palawan,” he said.

Instead of Malampaya giving away electric sewing machines and training women in dressmaking, the LGU would appreciate projects such as scholarships, day-care centers, and good rural health centers or service, he said.

The consortium could send three to four doctors who will go around the town’s 52 barangays. But funds from mayor’s permits could actually already cover these, Neri added.

What’s important, he stressed, is that the core needs of the residents of the municipalities where the pipes pass through are addressed and that they are not merely handed down a “menu” of programs that the consortium had already chosen for them without consultation.

“Did the local government [of Palawan] where the pipe passes through gain anything? If there’s no mayor’s permit, isn’t that a violation?” Gerry Arances, executive director of the Center for Energy, Ecology, and Development (CEED), said.

Ironically, one of the two barangays—Decabayotot—did not even have power until the village was aided by the Shell Foundation last year.

The municipality intends to bill the consortium around P12 million to P15 million a year— or a total of P240 million to P300 million—retroactive to their operations from 2002.

“Can you imagine how many [medical facilities] we could build using those funds?” Neri asked.

In 2019, the province of Palawan lost its bid to claim 40% of the net proceeds of total government earnings from the Camago-Malampaya deepwater gas project at the Supreme Court. The SC ruled that Palawan was not entitled to profit sharing because its jurisdiction refers only to its land area.

Manila Observatory Associate Director Tony La Vina said it is a pity that climate vulnerable island provinces like Palawan that host gas pipelines “are not assisted” or “don’t get any support to mitigate efforts.”

“It’s really quite wrong [that] Palawan didn’t get a share…from the use of the resource. National government should have at least given special attention to Palawan given [the] Malampaya gas field,” he said.

The Malampaya gas field was discovered in 1989 and commercial operations started in 2002.

Malampaya, which managed to generate 50% of Luzon’s power requirements, is projected to be depleted by 2024.

“There is an urgent need to address the impending shortfall in supply, and accelerate oil and gas exploration and find the next Malampaya,” Bomasang said.

“We intend to accelerate investments on the Malampaya gas field to improve the output of existing wells and…develop new wells in the area once the license extension is secured from the government,” Prime Infra chair Enrique Razon said in a statement.

Prime Infra announced in November that it was going to drill at least three wells to extend the production life cycle of Malampaya’s gas field.

Arances, however, said that “the Philippines cannot gamble on fossil fuels.”

“We should look at the industry in transition. We have to prioritize renewable energy. It is more affordable and accessible,” he said.

Residents of Palawan are suffering from frequent power interruptions. Power generation in the province is through diesel and bunker fuel.

There is a lack of supply from the plants of the National Power Corporation (Napocor) and private power providers, according to Ma. Christina Dalusung Rodriguez, district manager of the District Management Division Calamian of the Palawan Council for Sustainable Development (PCSD).

Neri, Linapacan’s mayor, said it behooves them to shift to renewable energy, and this transition should be completed by 2023.

Four of Linapacan’s 10 barangays have signified their intention to avail of the P15-million electrification loan the Land Bank of the Philippines, which will empower the villages to run their own hybrid combination of solar, wind, and diesel energy.

Neri said the municipality is looking at 24 hour-power—for a minimum of 200 households per barangay—where the different power sources will “co-exist.”

Each household spends P1,800 a month for 30 liters of fuel to light two to three kerosene lamps or those powered by generator sets. Under the electrification program, each household could have many light bulbs, power a TV set, and charge cell phones for a minimum of around P500 to P800 a month.

“It will be a big leap for them,” Neri said. 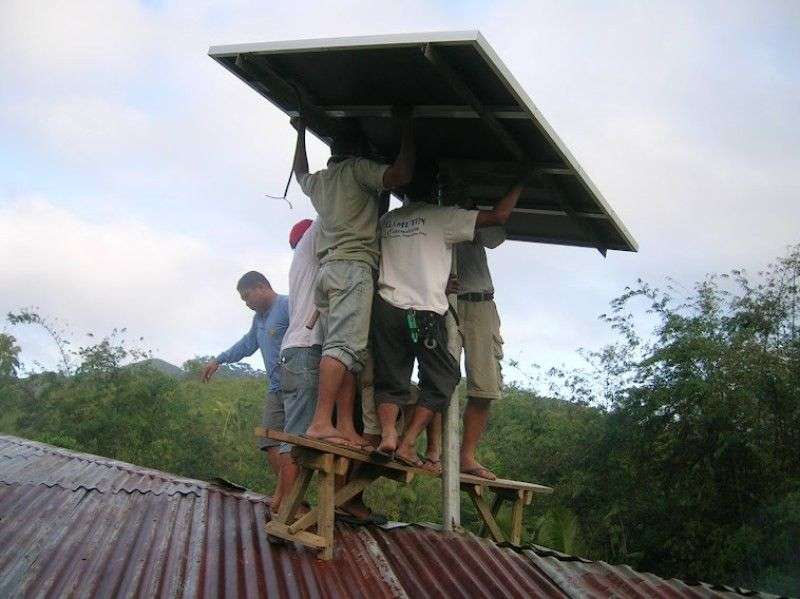 It takes a village to install a solar panel. Residents of Barangay Bagumbayan, Sergio Osmena, Zamboanga del Norte, help install a solar panel in 2007, thanks to AMORE 21, the Alliance for Mindanao Off-Grid Renewable Energy. The USAID-funded AMORE project was an R.E.-based rural electrification and economic development program implemented in the 2000s focused exclusively in Mindanao to support peace and development. Recipients of the program maintained and sustained operations of solar power, and eventually paid back the cost of the project. Photo from Robert Puckett of Solar Electric (Solarco).

“As long as there are no shades; [they are] in fluid-free zones or areas, are not near the ocean, not by the water, or blown off by water. Solar can be placed on top of dams though (floating solar), but should be steady in case of typhoons,” Puckett said.

“It will be good to place solar panels in Busuanga Pasture Reserve, since the area is flat,” Rodriguez said.

Then, there are micro-geothermal, and micro-hydro options as well.

“I suggest river turbines and wave energy, because dams are so costly and take so long to build,” Puckett said, adding that “wind is site-selective, mechanical, requires more maintenance, and is unreliable.”

Whatever renewable energy technology Calamianes goes for, Puckett’s advice is to “open it up for bidding: foreign or local; and get the best price” as he stressed the importance of “after sales service.”