First of a three-part story

Residents of Pesawahan Hamlet in Gununglurah Village, Cilongok District, Banyumas Regency, Central Java are in a familiar yet unwelcome situation.

Their nights have been darker and their everyday life has been met with more inconveniences after the micro-hydro power plant in the area stopped operating due to damaged parts. This had been their experience over a decade ago, before the power plant started supplying electricity to more than a hundred households in the area.

Warsito, head of Hamlet One, said the operator is still looking for a replacement for malfunctioning parts. Even so, the residents of Pesawahan do not want to do away with the power plant.

Gununglurah is one of the villages at the foot of Mount Slamet that benefited from the power plant project through the energy independent village program initiated by the Central Java Provincial Energy and Mineral Resources (ESDM) Agency.

This capacity is enough to power lights, television, refrigerators, and even washing machines.

Two years later, another power plant was established in Rinjing Hamlet, with a capacity of 15 kW.

Back in 1996, Warsito said the residents of the two hamlets used water wheels or turbines connected to a dynamo to generate electricity. Almost every house had up to two water wheels installed along the river.

Even though the electricity produced by a wooden turbine is only about one ampere or 220 watts, residents were still satisfied because they did not have to endure pitch-black darkness.

Their main concern about wood turbines was its unstable electricity flow. Heaps of trash and occasional strong water currents also posed challenges as these could damage the turbine. They also had to regularly check and replace the turbine.

“This difficulty was resolved when the power plant was built in 2010. Residents no longer went back and forth to repair the windmills. Their homes also get electricity with twice the power, so the plant does not only supply electricity for lights, but more electronic equipment that can be used,” Warsito added. 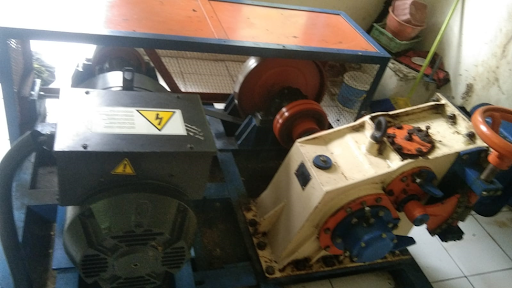 The micro-hydro power plant and the wood turbine both use the currents of the Mengji River to generate electricity.

“Dusun Pesawahan takes advantage of the swift flow of the Mengaji River upstream, while Hamlet Rinjing is at the lower reaches of the river,” said Warsito.

The utilization of new renewable energy is very economical for residents. Apart from being environmentally friendly, the clean power source eased the residents’ financial burden. On average, each household of Pesawahan Hamlet pays an electricity fee of IDR 20,000 per month plus a subscription fee of IDR 5,000. Meanwhile, the electricity fee in Rinjing Hamlet is averaged at IDR 10,000 per month.

Warsito is also proud that the residents of both Pesawahan and Rinjing are still reluctant to switch to the services of the State Electricity Company (PLN) even though electricity network poles have already been installed in the two hamlets.

“In Rinjing Hamlet, PLN electricity poles are already standing in front of residents’ houses. But 16 heads of families chose to stick with electricity from the power plant,” he said.

The same trend can be seen in Pesawahan Hamlet where only 15 out of 115 families were interested in sourcing power from PLN.

“We are proud of the enthusiasm and commitment of the residents of both Pesawahan and Rinjing. They are still actively maintaining the power plants and working together to clean up the river,” said Warsito.

In Pesawahan Hamlet, residents formed a group called Tirta Koran that seeks to manage the operations of the power plant from installation, maintenance of machines to collection of dues. The group’s head Ali Maksur said residents no longer need to go to the river to fix installations or broken cables because there are administrators who carry out routine maintenance.

“Maintenance is carried out so that the installation can last a long time, and ensure that the electricity network to residents’ homes is safe,” said Ali.

Apart from routine maintenance, Ali said the group also makes sure the environment is always protected, especially the forests.

Residents have been contributing money to sustain machine maintenance operations. According to Ali, the estimated amount of the power plant’s damage reached around Rp. 60 million. But with the help of the contributions, the damage can be addressed.

Within a month, according to him, the fees collected reached Rp. 1.5 million. The funds are also used to pay administrator fees of IDR 100,000 per month.

Moreover, the flow of the Mengaji River flows swiftly throughout the year. The upstream of the river is still in good condition so that the water never dries up, even during the long dry season.

“In the past, electricity from a wooden turbine to a dynamo was only able to turn on a light bulb. The lights are unstable, sometimes strong, sometimes dim,” he said.

But since the establishment of the power plant, there is no need for wood turbines. There have been no problems with the energy facility until now. This is because the Tirta Pengaji PLTMH Group routinely carries out maintenance.

Meanwhile, Roni Hidayat, who heads the Cilongok sub-district, explained there are four villages in his area that use water sources to power micro-hydro power plants, namely Karangtengah, Gununglurah, Sokawera and Sambirata. The four villages are located on the slopes of Mount Slamet, where the water potential is still good.

“In the future, the potential for PLTMH can still be developed considering that the water discharge in these four villages is still large because they are located in the upper reaches of the river, and the surrounding state forest is still dense,” said Roni.