In September 2021, Malaysia announced a goal for the country to become carbon neutral “by 2050 at the earliest” and pledged to no longer build new coal-fired power plants.

Although a National Energy Policy is set to be introduced by the end of 2022, the 12th Malaysian Plan (2021-2025) has already called for the development and utilisation of renewable energy sources to meet the 31% renewable energy target of total installed capacity. [1] The total renewable energy installed capacity mainly from solar and large hydro sources has increased from 6,059 megawatts (MW) in 2015 to 7,995 MW in 2020 while the Green Economy Indicators (GEI index) increased by 1.9% per annum from the baseline in 2010 to 114 points in 2017. [2]

There is a clear policy direction shift from when the oil industry dominated Malaysia’s energy up until the 1980s where the country began to diversify its energy sources via the 1980 National Depletion Policy and 1981 Four Fuel Diversification, adopting a four fuel strategy comprising oil, gas, coal and hydro-power. If current oil reserves are extracted based on the domestic consumption trend of 1980–2010, Malaysia’s reserves will last until 2027 but based on the 1998–2010 trend, the reserves will be depleted by 2035. Natural gas became the main energy source where in 2000 gas constituted 77% of the fuel mix. However, natural gas reserves based on production trend rate will only last until 2036 [3]. 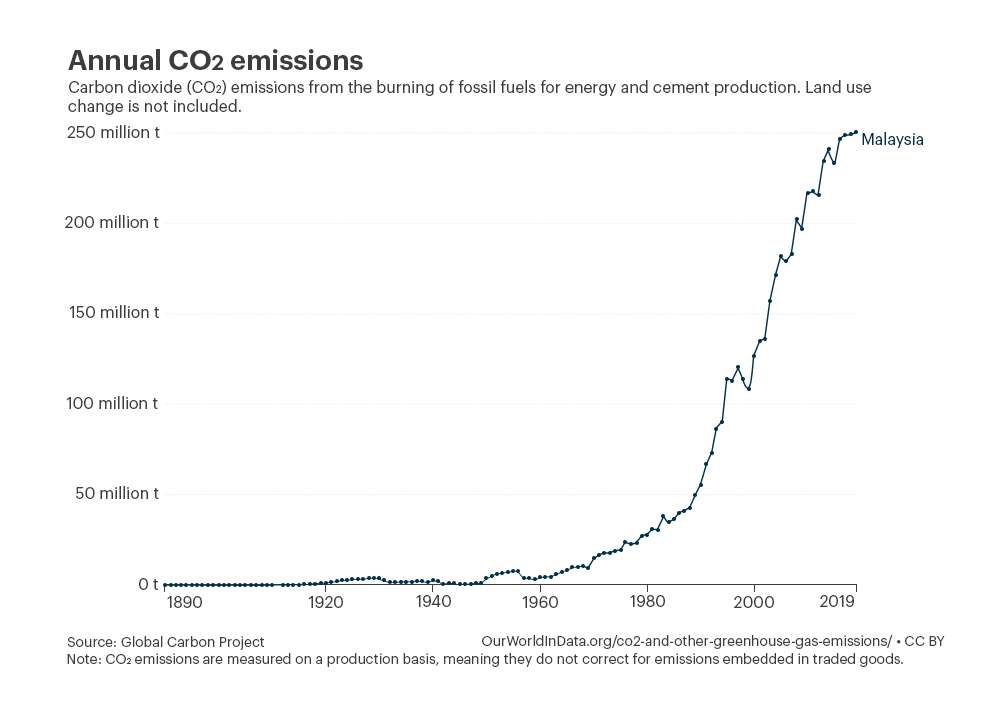 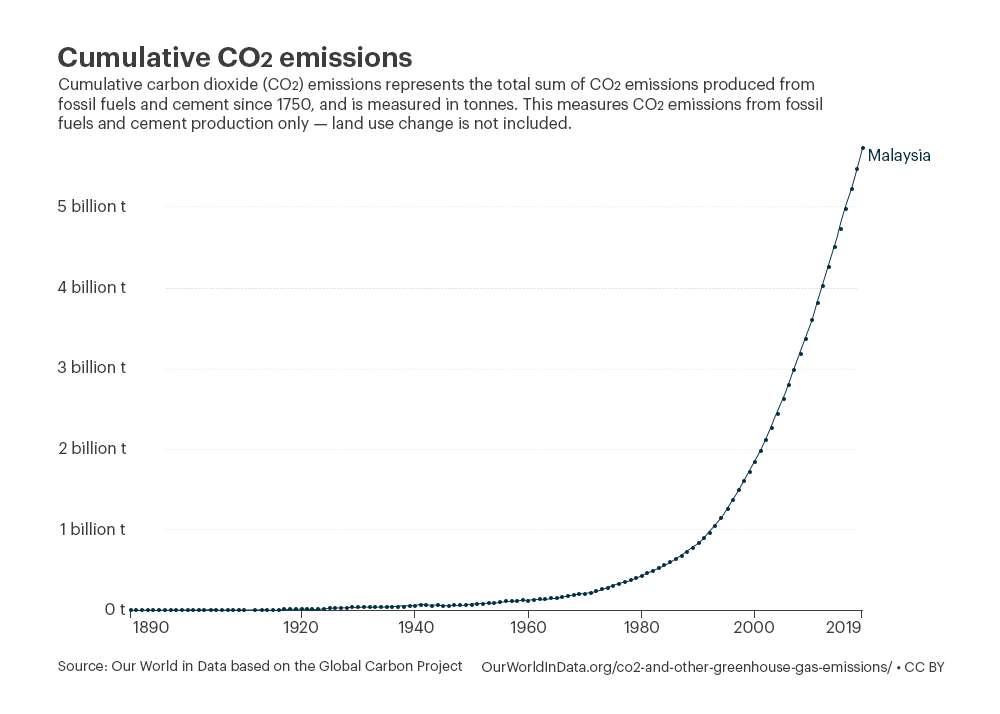 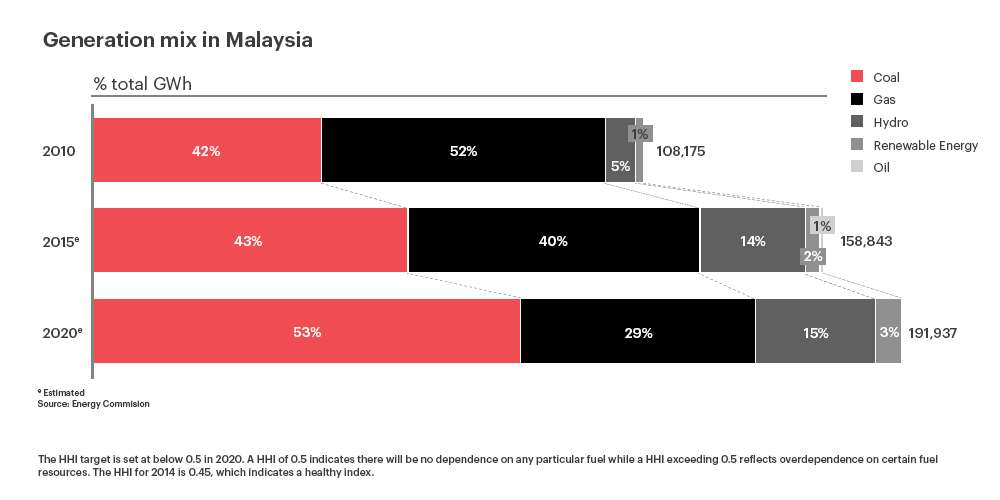 With fluctuation of oil prices and the depletion of fossil fuel resources and increasing air pollution due to greenhouse gases produced from the by-product of fossil fuels, Malaysia began to seriously consider renewable energy sources. The Fifth Fuel Policy (2000) also extended its fuel diversification policy to include renewable energy as the fifth fuel which includes biomass, biogas, biofuels, municipal waste, solar power and wind energy. The policy under the 8th Malaysia Plan (2001-2005) was to supply a total of 5% of the total electricity generated by using renewable energy. Various programs under the policy were introduced including the Small Renewable Energy Power (SREP), Biomass-based Power Generation & Co-generation in the Malaysian Palm Oil Industry project, and Malaysia Building Integrated Photovoltaic project. However, renewable energy only accounted for 12 MW of electricity by the end of 2005 despite the target of 500 MW. In 2009 only a target of 58.1 MW was generated despite an adjusted target of 350 MW in the 9th Malaysia Plan (2006-2010). [7]

The Renewable Energy Act was enforced in 2011 and was introduced “to accelerate contributions from green energy in Malaysia’s electricity generation mix” under the 10th Malaysia Plan (2011-2015). The Act enabled the introduction of Feed-in-Tariff (FiT) for Renewable Energy which the 11th Malaysia Plan (2016-2020) has reported an increased installed capacity fivefold between 2009 and 2014 to 243 MW. The plan also stated that the initiative reduced Greenhouse gas emissions by 432,000 tonnes of carbon dioxide equivalent (tCO 2 eq) via renewable energy through FiT. [8]

FiT is a mechanism that prioritizes electricity generated from indigenous renewable energy resources to be purchased by power utilities at a fixed premium price. The FiT in Malaysia obliges distribution licenses (DL) to buy from feed-in approval holders (FIAHs) the electricity produced from renewable sources and sets the FiT rate. The feed-in approval holders (FIAHs) are an individual or company who holds a feed-in approval issued by Sustainable Energy Development Authority (SEDA) Malaysia, and the holder is eligible to sell electricity from renewable resources. The tariff was enacted to overcome the shortcomings identified in the Small Renewable Energy Power (SREP) Program from 2001 to 2010. [9]

The renewable energy listed under FiT include biomass, mini-hydro, solar photovoltaic (PV) and biogas (including landfill and sewage) recorded a total of 1,099.91 GWh in 2019 which resulted in an annual reduction of 735,334.44 tCO2. The highest share of the four is the solar PV which recorded at 2,212.68 GWh or almost 40% of the total cumulative energy generation compared to biomass (30.65%), biogas (17.93%) and small hydro (11.53%). The surge of solar power in the context of FiT can be attributed to the highest starting FiT rate among the renewables, technological advancements and the decline in costs of solar PV panels while other renewable resources have not seen such progress.

Despite biomass is also as readily available producing more than 160 million tonnes of biomass, yearly with the palm oil industry being the biggest biomass contributor in Malaysia at an estimated 80% of total biomass energy potential, “fail[ure] to capture its energy generation potential mainly due to uncertainty of biomass feedstock supply and other technical, financial and policy barriers, as described extensively by many researchers.” [10]

Malaysia’s energy demand is expected to reach almost 100 Mtoe (million tonnes of oil equivalent) by the year 2035, where renewable energy will become a serious alternative. As Malaysia is one of the biggest producers of solar panels and photovoltaic equipment in the world while holding much promise under the FiT mechanism, the green economy is possible in Malaysia. Dr. Negin Vaghefi, an environmental economist at Penang Institute said, “Malaysia’s economy can benefit from this transition through technological innovation, green investment, new export markets for green goods and services, and a dynamic private sector” besides tackling the effects of climate change. Vaghefi added, “a key challenge, moving forward, will be the shortage of skills required to meet the needs of changing and newly emerging occupations, which is an important hurdle to green investments and the implementation of green growth strategies. Skills policies should therefore focus on upskilling, and/or reskilling the workforce to facilitate the transition to a greener economy and seize the employment opportunities that the transition entails.” 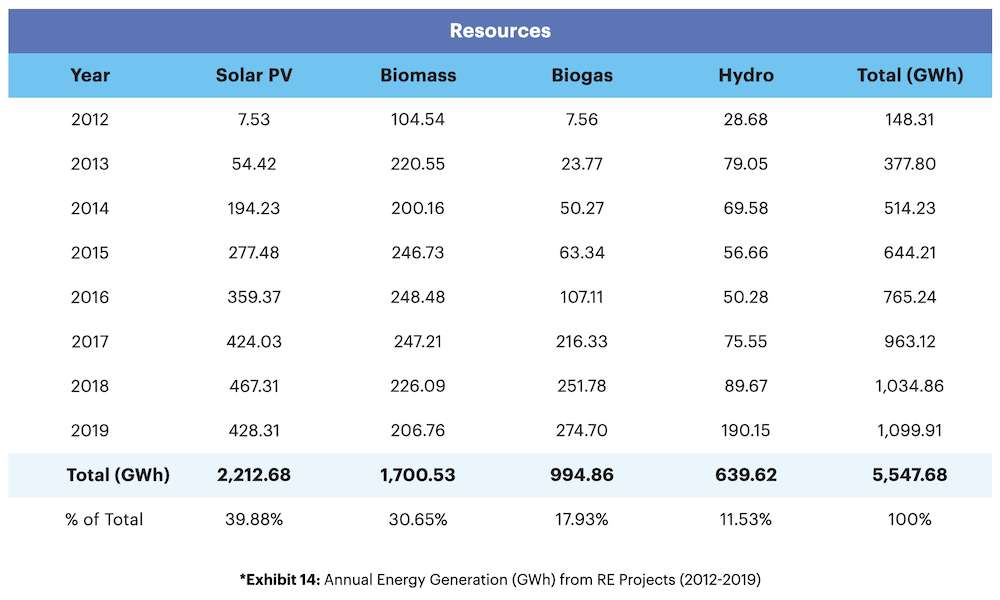 FiAHs achieving commercial operation close to year-end of 2019 will not have their RE generation captured here. The true generation data for year 2019 will be fully reflective in Annual Report 2020. 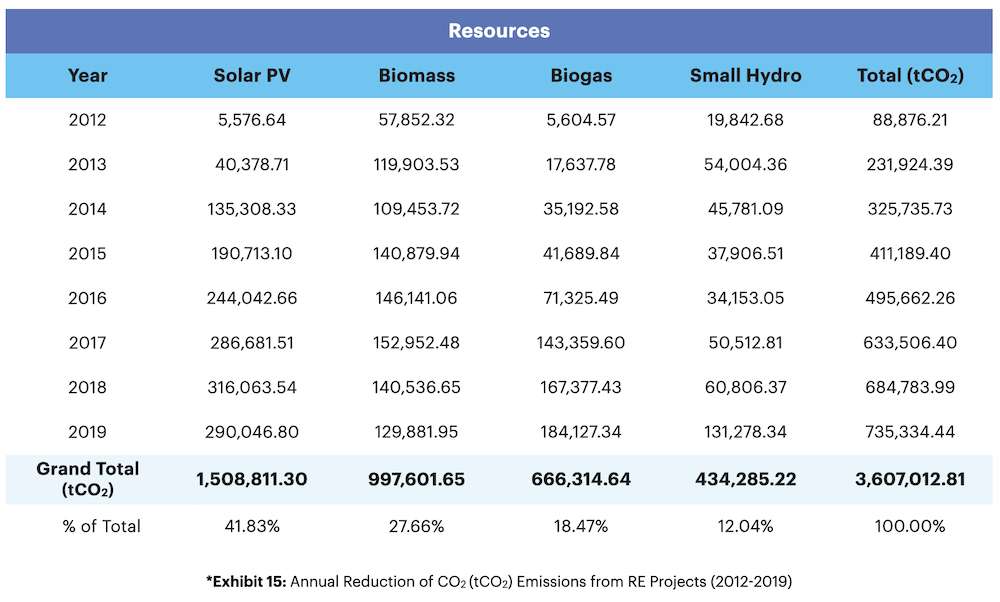 FiAHs achieving commercial operation close to year-end of 2019 will not have their reduction of CO₂ emissions captured here. The complete generation data for year 2019 will be fully reflective in Annual Report 2020. The CO₂ coefficient used is based on grid electricity emission factor for 2012-2014.

[8] Ministry of Energy, Green Technology and Water, Handbook on the Malaysian Feed-in Tariff for the Promotion of Renewable Energy, March 2011, p. 9.