Second of a three-part story

Drizzling rain drenched Kalipondok Hamlet in Karangtengah Village, Cilongok District, Banyumas Regency. A number of residents who had just finished their community service approached a food stall in the area. Some of them ordered rice with vegetables and side dishes.

The food stall’s owner, Kusmini, scooped cups of warm rice directly from an electric rice cooker that was still connected to the wall socket. The electricity that is powering the shop, which also serves as their house, is 900 watts.

“Nine hundred watts of power is enough to power a 29-inch tube television, refrigerator, rice cooker and washing machine. I pay contributions of around IDR 50,000 to IDR 60,000 a month,” said Kusmini.

That electricity sourced from the Telaga Pucung Micro-Hydro Power Plant also drives the wheels of the economy in the area.

Sunarto, one of the pioneers of the power plant, said about 80% of residents’ businesses are dependent on electricity. Thanks to the electricity from the micro-hydro generator, he is able to run a photocopying business. He also sells a variety of frozen food and cold drinks. His electricity bill a month usually costs Rp 100,000.

“We lived without electricity at all, around the 1980s. Only oil lamps provided lighting at night,” said Sunarto.

There are also no fears of a sudden blackout. The slightest disturbance in the power plant is handled quickly by the officers, even in the middle of the night. Prior notices are also issued if there would be power interruptions.

But it’s a different case with the State Electricity Company (PLN). Its consumers could be in for unexpected power outages.

In 1989, people living in the country’s protected forest used turbines powered by dynamos for their electricity needs. One turbine could provide service for up to two houses, but its capacity was only enough to power three lamps .

The turbines were installed along the Mengaji River. The electricity flowed through small cables supported by bamboo poles from the turbine to the residents’ homes.

Residents made the turbines on their own at around Rp. 3 million to Rp. 4 million. According to Sunarto, while turbines can last up to 10 years, the wooden wheels used in such devices were prone to damage. As a result, residents had to shell out more money at least once in two years to repair broken waterwheels.

But life became easier for the residents when the micro-hydro power plant was finally built.

“Residents no longer use turbines, after assistance was provided for a micro-hydro power plant from the TNI (Indonesian national army) in 2012. The assistance was an initiative of a Kodim member who was concerned about the condition of Kalipondok residents,” he added. 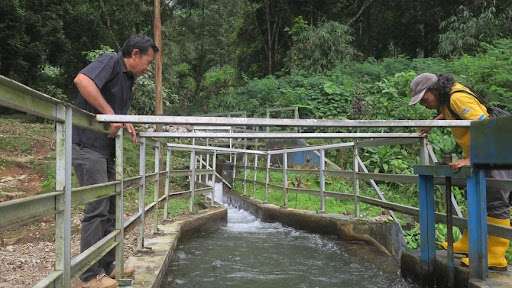 The water flow from Telaga Pucung enters the PLTMH holding tank before passing through the water filter. (Source: Hartatik)

The Provincial Government of Central Java through the Department of Energy and Mineral Resources (ESDM) eventually perfected the operations of the power plant. To further ensure enough energy supply in the province, a second micro-hydro power plant with a capacity of 15 kilowatts was inaugurated in 2016.

The provincial government also helped with the electricity installation. Apart from households, other customers of the power plant include business groups such as hotels around the Cipendok waterfall tourist attraction.

“In the past, there was no kWh meter for power plant assistance from the TNI, so the cost of using electricity was averaged [among residents]. The electric power installed in each house is also a maximum of only 450 watts,” said Sunarto. 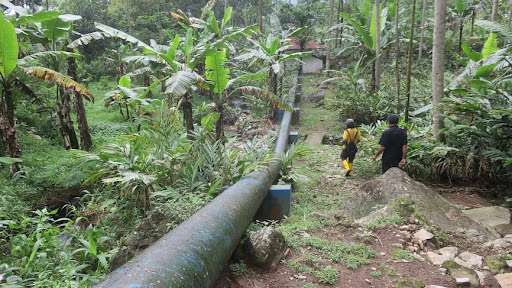 Zaenal, chairman of the Telaga Pucung power plant, said tariff rates vary for each establishment. For households, the rate is set at Rp. 500/kWh. Business establishments meanwhile are required to pay Rp. 700/kWh. There are around 75 houses and two hotels that rely on the power plant.

In a month, the gross income from residents’ electricity fees is around IDR 1.5 million. From this gross income, five administrators receive a 10% honorarium.

“For administrators, managing a power plant is not to make a lot of money but rather community service,” said Zaenal.

Aside from operational expenses and payment of salaries, the income generated by the power plant is used for social services such as donations for funeral expenses of a community member and provision of funds for independence day commemorations.

“In principle, the power plant does not just produce electricity, but has a social content in it. The community also owns and maintains the power plant, so that it continues to survive, so that it provides a livelihood in this hamlet,” he added.

With the establishment of the power plant, residents no longer need to depend on electricity provided by the state. Residents are not worried about running out of electricity, since they rely on the energy facility that maximizes hydro energy.

Agus Sulistyono, secretary of Karangtengah Village, said the discharge of the Pucung Lake spring has never gone below the required output.

“Last month, until the flood occurred, the water discharge that entered the reservoir was reduced. Because if it’s too much, high water-borne sedimentation can clog the engine (generator),” explained Agus. 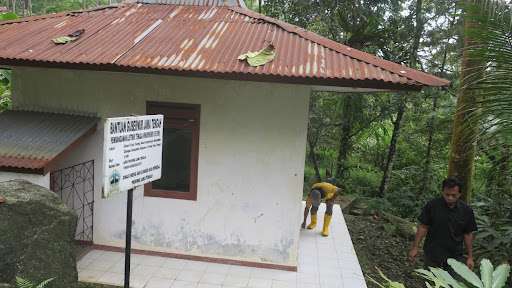 According to the Geotechnology Research Center, forests in Banyumas Regency are better protected than those in other districts that are also at the foot of Mount Slamet. One of them is found in the area of Karangtengah Village. The protected forest functions to maintain vegetation cover and soil stability. It also acts as a water catchment area and a water supplier to the reservoir system.

Karyoto, the head of Karangtengah Village, lauded the crucial participation of community members in the continuity of power plant operations. He said the commitment of the residents to preserve the forest helps ensure enough water flow to the energy facility.

“The community is aware of the important role of the forest as a spring protector. Periodically, they also clean the lake water flow so that the power plant machine is not easily damaged,” said Karyoto.

In addition, the water used to drive the power plant turbine is released back to the rivers such as Peh River, Prukut River and Wadas River. As a result , residents and farmers can still use the clean water. 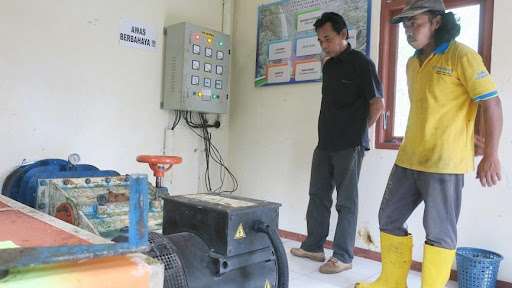 Kalipondok Hamlet is one of the areas that is able to maintain the power plant well 10 years after it started operating. Kalipondok has won an award as an Energy Independent Village at the Central Java Province level in 2020. For this success, the state-run electricity provider expressed its intent to also supply power to Kalipondok.

“PLN has persuaded us three times, the last time coming in 2021. We still refuse PLN to enter Kalipondok,” said Karyoto.

For Karyoto, their refusal means they just wanted to ensure that the Telaga Pucung micro-hydro power plant will not be neglected. He said the energy facility is also a state asset that needs to be maintained.