Holy Water: The Philippine Activist Targeted for Trying To Stop a Hydropower Project

What you need to know

Dozens of elite armed forces were sent to arrest Vertrudez Macapanpan, a 69-year-old environmental activist in the Philippines. She has no doubt the cause was her work defending a sacred mountain spring from a billion dollar development project.

There was no courtesy of a knock. Vertrudez Macapanpan was preparing an afternoon snack for a carpenter at work at her home last June in Pakil, a small town in the Philippines’s Laguna province, when she heard a thunderous crash. A platoon of fully armed soldiers and police funneled through her front door.

The first intruder pinned Macapanpan, 69, to the wall. On her right she saw columns of troops pour into her home. Then she heard the pounding of multiple pairs of feet on the second floor. She lost count of how many had broken in.

President Ferdinand “Bongbong” Marcos Jr., son of the late dictator, had won the elections just a month earlier. Macapanpan, who lived through the Marcos dictatorial era in the 70’s and 80’s, pelted the state forces with questions. “I kept asking them, is it Martial Law already?” she told The News Lens, cursing at the incident. One of the uniformed personnel asked her to “stay calm and don’t move.”

Macapanpan recounted the day of her arrest on the charge of rebellion last June so effortlessly, and yet so painfully. Now out on bail, hardly a day goes by when her eyes do not wake to the fearful memory.

Over three dozen combined members of the elite police Special Action Force, Quezon Provincial Police Office, Laguna Provincial Police Office, Police Regional Mobile Force Battalion 4A, Philippine Air Force and the Philippine Army broke into Macapanpan’s house. It begs the question if the disproportionate numbers sent to interrogate an elderly, unarmed activist were for the authorities own protection or to strike fear into the heart of their target. They never said her name, only mentioning the unfamiliar alias of “Ka Chan” as they slapped handcuffs on her.

Macapanpan shrieked and clung to the grills of her window as the cops and soldiers began to force her to the street. “I don’t know who you’re talking about. What are you doing in my home? I have no crimes against any man, any government or god,” she repeated like an incantation, louder and louder.

Outside her house, neighbors caught sight of the incident but could do nothing. The array of police and military had barricaded the entire block to arrest Macapanpan, without any warrant.

The authorities maintained that Macapanpan was wanted for being part of the armed over 50 year communist insurrection in the Philippines. The practice of labeling activists and government critics as communists has become known as red-tagging.

Despite her resistance, Macapanpan has no doubt that she was arrested on account of her involvement in a campaign to prevent the construction of the Ahunan Pumped-Storage Hydropower Plant on the nearby Mount Ping-as. The massive 1400 megawatt dam will eradicate the natural pools in Pakil, while siphoning off the potable spring water from the Sierra Madre Mountain range and water supply from the Laguna Lake.

Macapanpan is a longtime environmental defender and has long criticized the government’s red-tagging tactics. She taught Filipino and Philippine Institutions at the University of the Philippines, but has always grounded herself in Pakil.

The hydropower project, which costs US$1.3 billion, will be developed by the joint venture of tycoon Enrique Razon, a close friend of former President Rodrigo Duterte. The National Unity Party, which he backed, was also one of the most prominent endorsers of President Marcos in the recent elections. 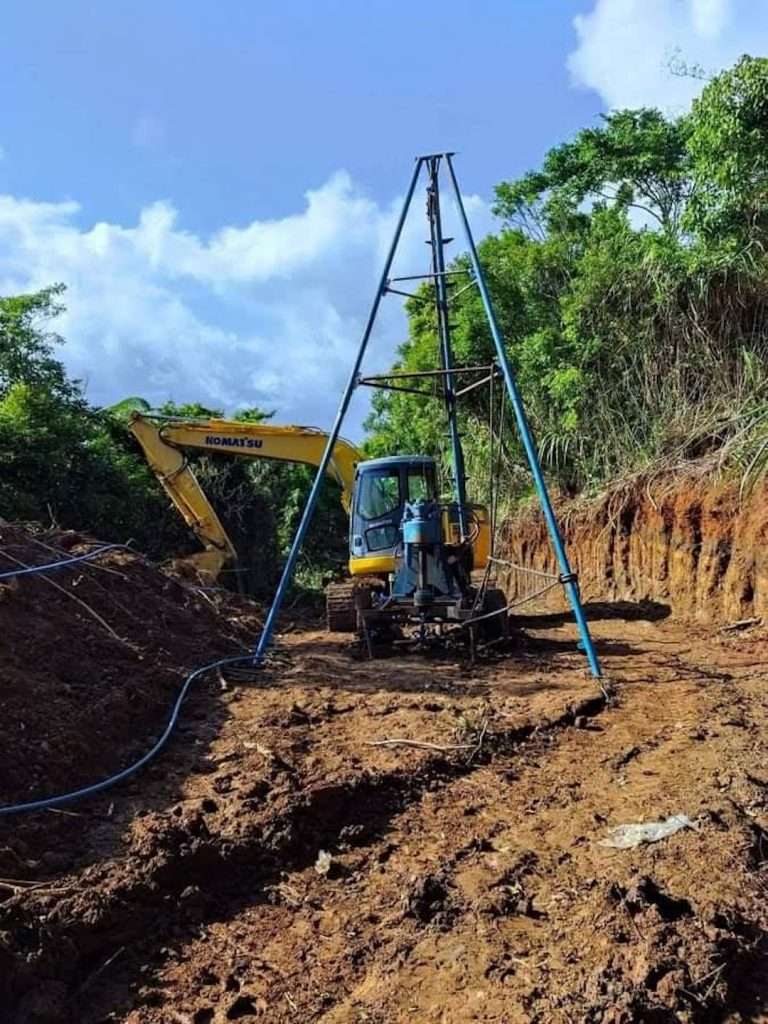 Construction of the Ahunan Pumped-Storage Hydropower Plant on Mount Ping-as.

Mount Ping-as has long been a vital part of the cultural and religious heritage in the region of Pakil. It is the site of an over 200-year-old annual Christian pilgrimage known as the Turumba festival. For locals, the spring water is free and they believe it to be blessed and holy. Like Macapanpan, the residents are accustomed to visiting the pools for swimming.

The project poses a threat to the natural water table in the mountain. “The mountain is a mountain of water, and its care is something that has been passed down by generations of people in the town. The large tree roots crisscross the mountain and the spring water that comes from it is clean, basically mineral water,” explained Macapanpan. The roots hold together the land and yellow adobe rocks and other minerals.

Pakil residents first got wind of the project early this year, when the initial feasibility studies had been done. Macapanpan and the townsfolk, including engineers and other professionals, founded the group Mamamayang Nagmamahal sa Pakil (Pakil Loving People) or MANAPAK (Punch) to stop the construction of the dam, but soon learned that the Sangguniang Bayan or Town Council had passed three resolutions in 2020 stating no opposition or objection to the hydropower project.

Pakil Mayor Vincent Soriano has been keen to court investments involving water resources to transform the town. In April and May 2022, MANAPAK engaged Soriano in dialogue and read his exchanges with the Renewable Energy Management Bureau and Department of Energy on the prospects of a hydroelectric project. The Mayor also told them that he had asked the Town Council to pass the above-mentioned resolutions.

In an open letter signed by Soriano, Laguna Governor Ramil Hernandez, and Ahunan Power President Rafael Bueno Jr., the trio insisted that the project go ahead despite opposition. “It will provide 2,000 jobs in the construction period alone, [and] the project will be an important source of electricity, jobs and in the end, development for Pakil and the province of Laguna,” it wrote. 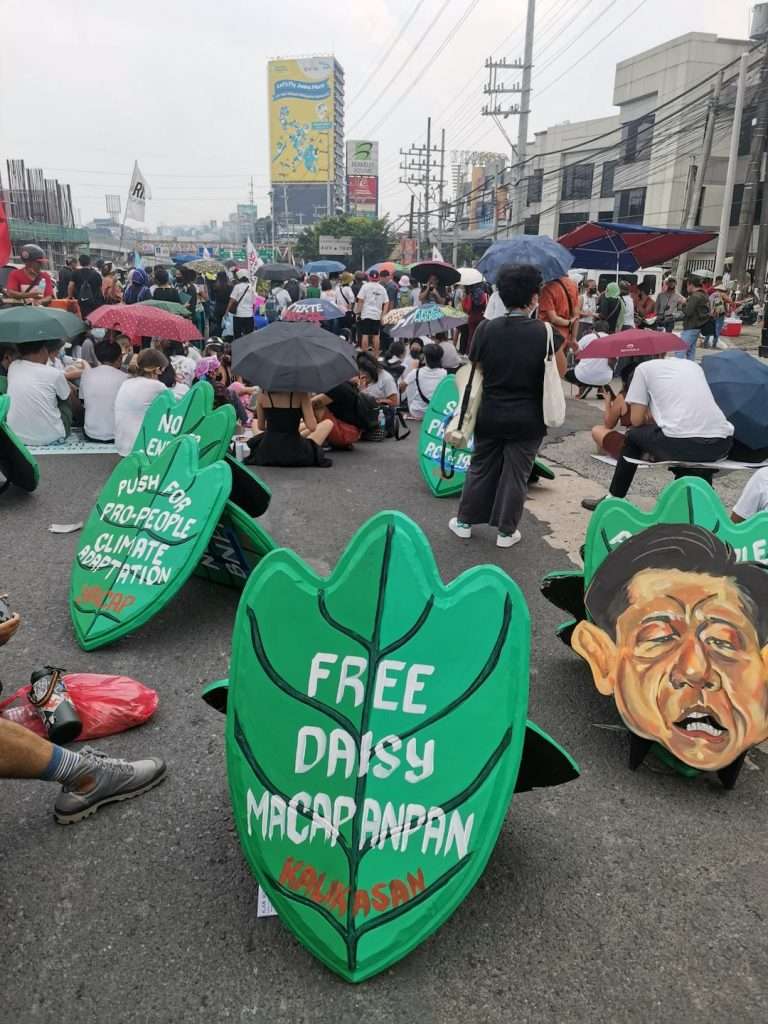 Environmental advocates at the 2022 People’s SONA (State of the Nation Address) with shields in support of Macapanpan, July 2022.

As of the moment, the Department of Environment and Natural Resources (DENR) has yet to complete an Environmental Impact Assessment of the project, which is required for operations to proceed. ButMacapanpan recalls seeing a squad of armed guards, a backhoe and bulldozer on site in May. In August, Manapak saw men cut trees for the project.

The group said Laguna’s two major dams, Caliraya and Botocan, plus the Kalayaan Hydropower plant have already increased the risk of flooding. During rainy days, they have to release water reserves to prevent an overflow.

Environmentalist group Kalikasan estimated that the Ahunan project will affect around 299 hectares of land. They also noted the dam is located in a region characterized by active faults and subduction zones within a 150-km radius. The risk of landslides is also high.

The Pre-Feasibility study carried out by AFRY, an international design and engineering firm, stated that while the project may be “technically feasible” it does carry some “moderate to high” seismic risks in construction. It also pointed out the possible pollution of water sources and extensive excavation in the mountain.

Besides taking away a natural water source, jeopardizing wildlife and ecological balance, increasing the risks of floods and landslides, the Ahunan project also weakens the town’s natural protection from typhoons. Pakil lies at the foothills of the Sierra Madre mountain range, the largest in the archipelago and considered to be the country’s shield from heavy eastern winds and rains.

Kalikasan’s Leon Dulce defended MANAPAK’s attempts to stop the project from going ahead and asked the authorities to engage better with the stakeholders. He said, “There is nothing wrong with airing disapproval and explaining opinions on why the Ahunan Hydropower Project should be shelved. The purpose of such discussions that locals have is to raise awareness and discourse over the matter at hand.”

Macapanpan posted bail and was released on August 9. Her lawyers argued that since their client was not stipulated as a “high-ranking” rebel official, she was entitled to bail. Moreover, the entirety of the charges leveled against her come from the accusations made by a police asset. Macapanpan’s supporters raised around 200,000 pesos for her release.

The case highlighted a string of ongoing human rights violations in the Southern Tagalog region. Cristina Palabay of Karapatan, a national human rights network, said the “alias warrant on rebellion charges filed in 2008 against Macapanpan was used against other activists in Southern Tagalog.”

Locally in Pakil, the support for Macapanpan somehow coincided with a change of heart for the Town Council. On the day she left prison, the council revoked the earlier three decisions favoring the Ahunan project.

In response, Ahunan Power wrote to the council on September 20 a stern letter of opposition. “To now pass a resolution that unilaterally reverses without giving Ahunan Power notice and opportunity to be heard is akin to impairing and diminishing the efficacy of a contract which even legislatures are reminded not to cavalierly do,” it read.

Operations for the Ahunan project continued albeit not at the pace its proponents might have expected, as they waited for issues with the local government and the DENR to be resolved. Incidentally, Macapanpan’s arrest has drawn attention to the one of the biggest ongoing cases of the capture of water resources by corporations in the country today.

Macapanpan’s ordeal has also left her in two states of mind. She is more grizzled than people at her age and more determined than she could imagine.

She has waged a crusade on two fronts. In terms of her legal predicament, her lawyers filed a motion to quash the charges against her which she labeled a “desperate” ploy by those in power. For the town of Pakil she is looking to champion with MANAPAK an “injunction against the project and a resolution to declare the areas pegged by Ahunan as a watershed. That way, it is legally bound to be preserved.”