The Philippines, being one of the most vulnerable countries to climate change should prepare countermeasures against its negative effects. This is why the Paris Agreement and the Nationally Determined Contributions have been set out–to mitigate the possible catastrophic effects of this phenomenon to agriculture, aquatic, natural resources, health, energy, and other sectors.

Taking these risks seriously has made the Philippines execute different adaptation and mitigation efforts towards a low-carbon future. Policies on the transport and power sectors are among the major concerns under the Philippines’ net-zero goals which will be discussed in this briefer.

Although the country has not been a major contributor to world GHG emissions, it presented an increasing trend. From 1990-2017, the country’s GHG emission (figure 1) has increased by 114% (attributed to the energy and industry sector). Looking closely at the path towards decarbonization, the energy sector plays a vital role in achieving the goals set in the NDC.

The Philippines’ total primary energy mix is composed of 50.2% indigenous and 49.8% fuel import energy (2018). Seventy percent of the fuel mix is fossil fuels (coal, natural gas, and oil) and 30% is low carbon (renewables and others) as seen in figure 2.

Since 2011, fossil fuels have been dominating the fuel mix, leaving renewables (25%) at stagnated pace.

The Philippine government considers coal as a reliable and affordable source of energy as it can produce electricity that can power up manufacturing, industrial plants, and residential homes. By 2040, local coal reserves will reach 766 MMMT and local coal production is estimated at 282 MMT. This projection cost about PhP 609.3 billion and will require investments. Currently, there are two coal projects certified as Energy Projects of National Significance (EPNS) that can potentially generate investments of about PhP 143 million.

The country is boosting the investment opportunities in the oil and gas sector especially that Malampaya is near depletion. The Malampaya Deep Water Gas-to-Power project remains the largest source of natural gas in the country since January 2002. Almost 30% of power generation in Luzon is fueled by its five power plants in 2018 and 2019.

Major sources of GHG in the energy sectors

In 2018, the transport sector remains the most energy-intensive (35.7%) sector due to increased demand for gasoline and diesel for road transport and aviation turbo for domestic air.

Given that the transport sector is dominated by fossil fuels, decarbonization efforts are prioritized in this sector. To make this possible, the Philippines government implemented the Jeepney +NAMA (Nationally Appropriate Mitigation Actions) which aims to establish a modern, sustainable, and climate-friendly road-based public transport system in Philippine cities. Jeepneys that are at least 15 years are not allowed to register or operate and will be replaced by Euro-4 compliant, LPG-powered, or electronic engines. It is envisioned to provide comfort to commuters since jeepney routes and time of arrival will be assigned in designated areas of the cities for a faster commuting time.

Jeepney drivers, owners, and operators slammed Jeepney + NAMA and took the road for a mass gathering and transport strike. They argued that low-income jeepney owners and small-time operators are carrying the burden of transitioning to green transportation.

More than fifty percent of the Philippines’ electricity rely on coal (figure 3). It is important to note that reliance on coal can lead to a carbon-intensive system that can hinder the path towards net-zero goals.

Greenpeace argued that “coal is not clean, not cheap and not sustainable. Investing in coal is investing in the climate crisis that is already impacting the lives and livelihoods of millions of Filipinos, and costing Filipino taxpayers billions every year.”

Transitioning to a greener pathway, the Philippines announced a moratorium on new coal projects and advanced in supporting projects that prioritize renewables. This is expected to curb energy emission by up to 35% by 2030 (Philippines Energy Plan) and will bring the country closer to its NDC. The Philippines is the first country in the Southeast Asian region to set a moratorium on coal.

However, the moratorium on “new” coal-fired power plants will not eliminate them. Secretary Alfonso Cusi of the Department of Energy said that oil and coal will still have a place in the Philippine energy mix while renewable and gas will increase share in the next coming years.

Among the drivers of GHG emission are cement and steel production which are both challenging to decarbonize. This sector has a 13% share of CO2 emissions in 2018. In terms of total energy consumption, it has 21.9%.

Policy under this sector is the Energy Efficiency and Conservation Act which covers small commercial buildings and properties that should adopt energy-saving measures. Properties that consume at least 100,000 kilowatts-hour should comply with this law.

This sector includes emissions from heating, cooling, and lighting appliances from residential and commercial buildings. From 2013-2018, related emissions have significantly increased by 51%.

The Philippine Green Building Code seeks to ensure the construction of efficient and sustainable infrastructure that will not harm the environment and human health. Efficient use of resources, site selection, planning, design, construction, use, occupancy, operation, and maintenance are among the requirement of this code.

Collective efforts from private companies will play an important role in achieving decarbonization. Headed by the Energy Development Corporation (EDC), a group of companies forged to be “prime movers” of carbon neutrality in September 2021.

“We are putting into action our revitalized mission in the Lopez Group to ‘forge collaborative pathways for a decarbonized and regenerative future’ by seeking partnerships and synergies with fellow enterprises in the country,” said EDC President and COO Richard Tantoco during a webinar.

Dubbed as the Net-Zero Carbon Alliance, the member companies are listed below:

Hydropower — Prior to the Renewable Energy Act of 2008, there are 3,291 megawatts of hydropower electric power installed in specific sites which increased to 3,543 megawatts in 2014. IRENE identified untapped power potential resources equivalent to 13,097 megawatts, 11, 223 of this can be utilized for large hydropower that accounts to 86% of the total potential hydropower resources.

Solar — In 2016, Luzon and Visaya had 95% of the solar power generation capacity of the country. Solar PV (photovoltaic) has been adopted by industrial and commercial to reduce electricity consumption.

Biomass — nearly 30% of the energy source of 100 million Filipinos comes from biomass (mainly used for household cooking by the rural population). The biomass industry has 276.7 megawatts of a total installed capacity around the country.

Ocean — estimated energy generation capacity of 70.5 megawatts was proposed for development in 2013- 2030. However, the sites identified in the plan require more detailed exploration studies to ensure technical and economic viability.

Geothermal — the International Geothermal Association reported that in 2015, the total installed geothermal electricity generation capacity of the country reached 1,900 megawatts making the Philippines the second largest in the world after the US. This generated 14% of the total national electricity supply and savings from fuel imports. The Philippine geothermal energy market is forecasted to grow at a Compound Annual Growth Rate (CAGR) of 1.5% during the forecast period of 2020-2025 (PNRNewswire).

Wind — energy source reached 337 megawatts in 2014, showing fourfold of its previous amount in 2013 (33 megawatts). This has continued until 2020 amounting to 443 megawatts (Statista Researcher Department).

Since the implementation of (Feed-in Tariff) FiT, the cost of solar and onshore wind technologies declined and prompted remarkable renewable energy deployment in the country.

The reliance on coal imports for the power sector and oil for the transport sector proves that energy sufficiency is a major concern. In 2017, a total of 11 billion USD were spent on fuel imports alone. This expenditure should have been invested in other renewable energy potentials such as solar, wind, bioenergy, and a significant amount of geothermal energy present in the country.

Realizing this, the Department of Energy implemented the National Renewable Energy Program (NREP) which provides technology development and investment planning for renewable energy. In the updated NREP 2020-2040, at least 20,000 megawatts of RE capacity is targeted by 2040. This also aims to strengthen investments in RE projects.

Below are RE facilities that are commercially operating in the country under NREP (LMIR): 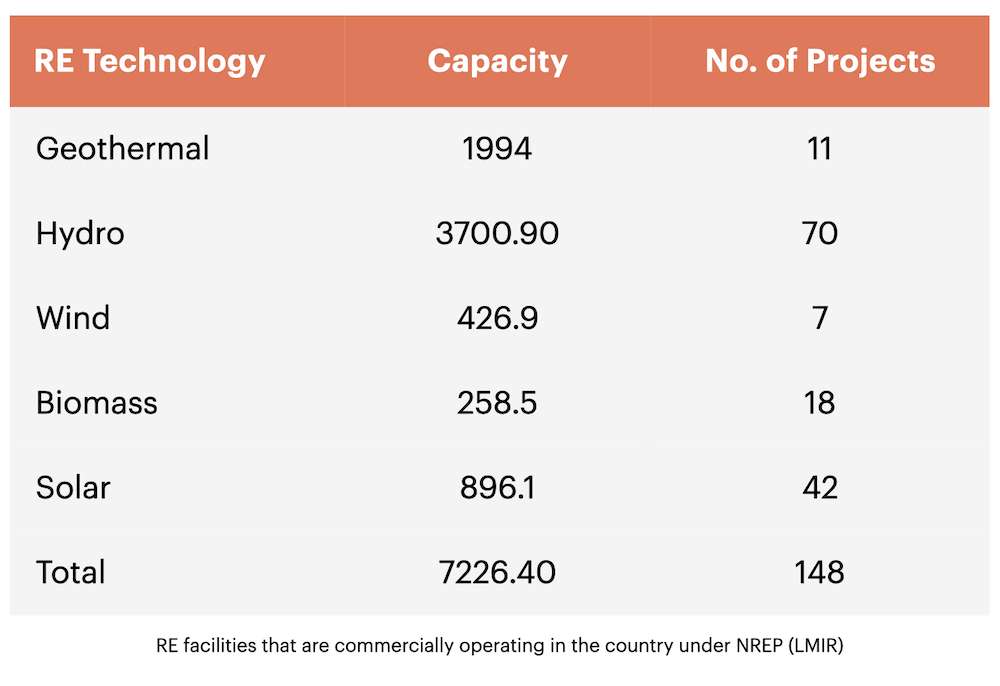 In 2019, Philippine News Agency reported that the Philippines has about 32.8% share of renewable energy in the supply mix. This is the highest RE generation mix within the Southeast Asian region.

In a Philippine Electricity Market Corporation (PEMC) report, Php 4.04 billion of energy costs was saved under RE. Such savings are “simultaneously generating more local jobs and reducing the country’s share of carbon emissions by an impressive 2.8 million tons” according to World Wildlife Fund Philippines.

Investing in renewable energy today should be a priority. According to IRENA, every dollar invested in the clean energy transition provides a 3-8 dollars return. Transitioning to renewable energy will also provide the following benefits ( World resources Institute and Labor Market Intelligence Report):

Employment — transitioning to renewables will generate green jobs and demand for labor and employment (Republic Act 10771 or the Green Jobs Act of 2016 also encourages green jobs by providing them with fiscal and nonfiscal incentives such as special tax deduction and duty-free capital equipment importation (Department of Labor and Employment 2020).

Access to electricity — will give more than 2 million Filipino households access to cheaper, decarbonized, and decentralized power generation systems. Renewables will be sourced locally giving more chances for electrification of remote areas.

Resilient energy system — the distributed energy systems of renewable energy are not dependent on fuel and power chord prone to destruction from calamities and natural disasters. In 2015, almost 40% of businesses were struggling with power outrage and have lost about .08% of their sales. Power outrages caused economic concerns throughout the country.

Apanada, M. J. (2020). Why the Time Is Right for Renewable Energy in the Philippines. World Resources Institute. Retrieved October 20, 2021, from https://www.wri.org/insights/renewable-energy-opportunity-philippines 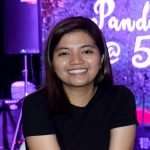