Crisis driven by climate change: Farmers quarrel over water for crops in Malaysia

This story was produced with the support of Internews' Earth Journalism Network and Climate Tracker.

The Kinta Valley in Perak was an important tin mining area and, until the 1980s, helped make Malaysia the supplier of half of the world’s tin.

Mining operations left plenty of mining lakes in the area and these lakes eventually became an important water source for farmers in the valley.

Climate change has, however, disrupted Malaysia’s weather pattern, leading to more droughts and rainstorms that have impacted crop production.

A rare but long drought occurred from January to March 2020, and the former tin mining lakes dried up after more than a month of no rain.

In order to keep their crops growing, the farmers were forced to fight among themselves for water. Others had to give up their harvests.

Even worse, some farmers tapped into underground water and risked causing environmental damage. 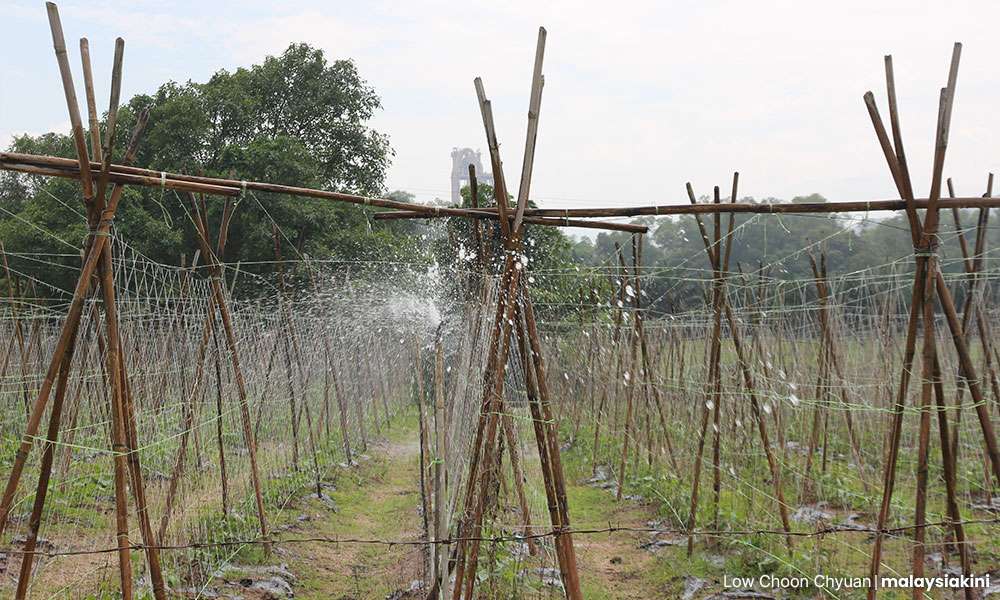 The farmers told Malaysiakini that they are concerned that the weather pattern has changed and are worried that the droughts will recur in future.

Malaysiakini interviewed several farmers from Kanthan and Sungai Siput, who all said that the last drought occurred in early 2020.

The Sungai Siput farmers recalled how the mining lakes surrounding their farms dried up and they had to get water from a nearby river.

The river comes from a nearby forest hill and it flows through several farms. However, due to a lack of rainfall, the river became shallower and didn’t have enough water to supply each farm.

Tan Chee Huat’s corn farm is located upstream and the river flows through his farm first. He told Malaysiakini he would use sandbags and a board as a watergate, to stop the river and divert the water into his farm pond. 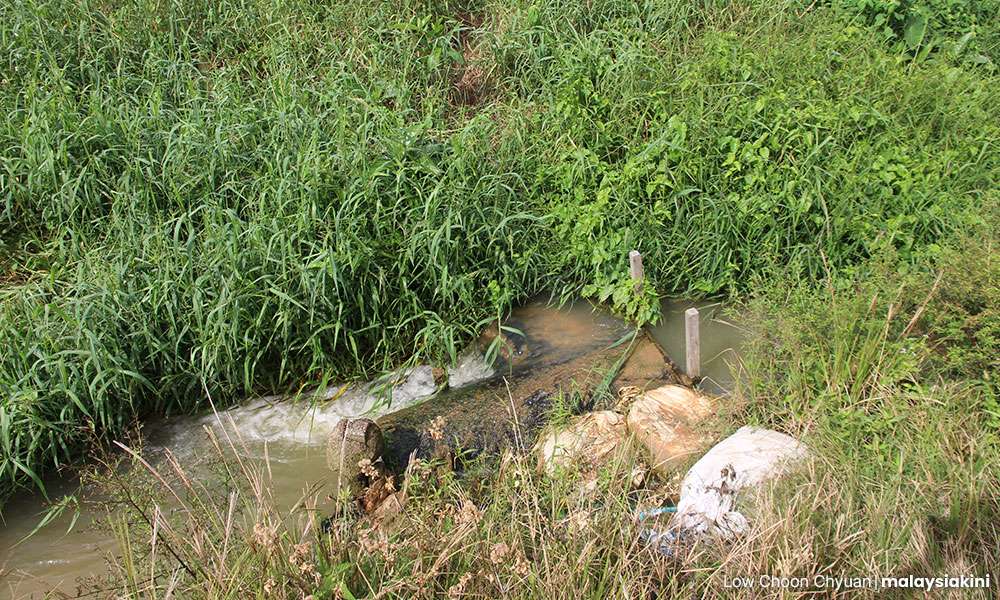 During droughts, farmers use sandbags and wooden boards to stop the water from flowing downstream

With the watergate in place, the river did not flow downstream until Chee Huat was done watering his crops and releasing them.

“The river is too dry. No matter when I released the gate, the downstream farmers had to wait,” the 48-year-old farmer explained.

But he said that a few farms next to his were planting vegetables that consumed more water and needed to be watered twice a day, so water had to be dammed up for longer. 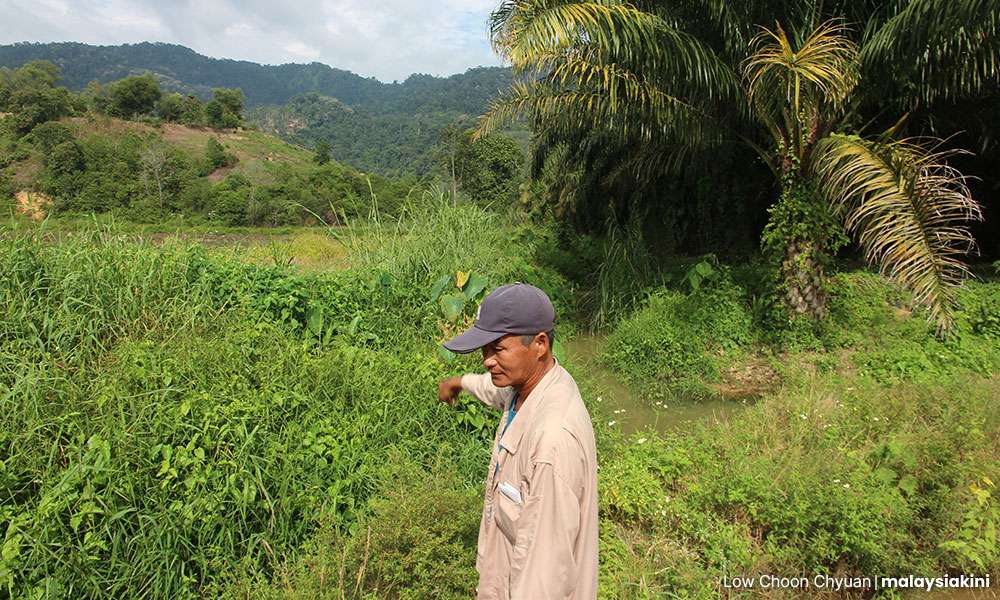 Chee Huat recalled that the farmers downstream from his farm checked to see why the river would stop flowing and this led to disputes and the demand for farmers upstream to “give some water”.

“The farmers from downstream didn’t get enough water. Farmers in this area shared this water, but the river water can’t flow. They are forced to quarrel.”

He said that since farmers downstream had to wait for the upstream farms to be watered, many “had to wait until 7pm or 8pm, then they started watering at midnight, better than none.”

Malaysiakini found one of the farms where the river water reached last. Crop farmer Tan Chiew Cheng said he tried to communicate with upstream farmers to ask them not to use up all the water.

“But they said: ‘I don’t get enough water, how am I going to give it to you? I need to earn a living as well.’”

How did the downstream farmers respond? Chiew Cheng said some farmers would remove the sandbags to let the river flow.

Unfortunately, Chiew Cheng’s farm is in the most downstream area and water “had to go through four to five watergates”.

“Even if I pull some sandbags away, it would not help,” he said.

Amid the tension over water, Chiew Cheng decided to avoid conflict and stop planting new crops. He said he would rather wait for the rain to come.

“It was very tense and we didn’t dare to plant. We would end up fighting or quarrelling.” 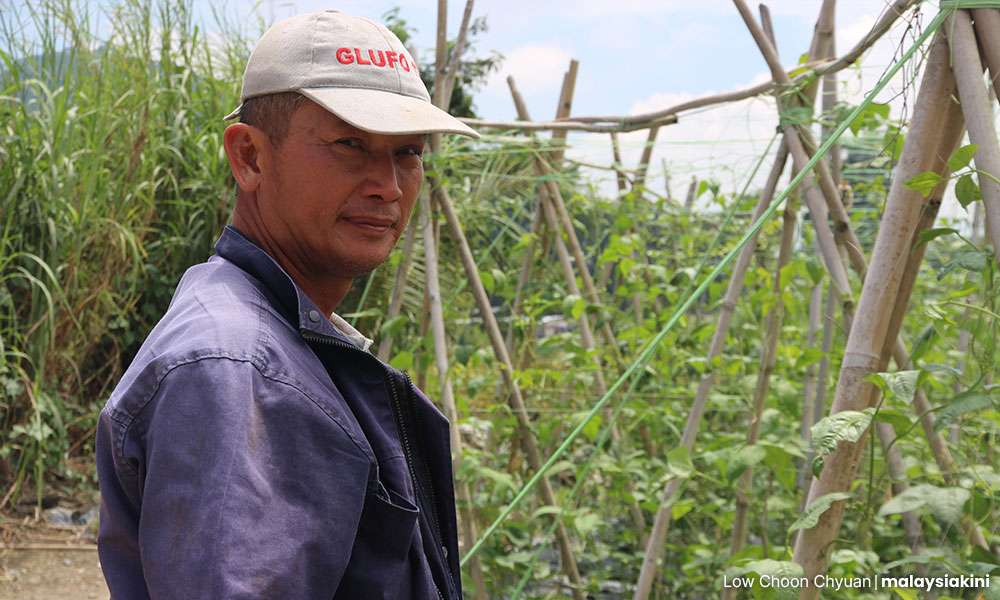 Some farms in Kanthan are further from the river, so the farmers had to dig deeper into the former mining lakes or underground for new water sources.

A corn farmer, who wished to be known as Mr Chai, said it normally rains every two weeks, but when there was no rain for more than a month and the lakes dried up, farmers would use dredgers to look for more water.

Another farmer – Liew, who requested anonymity – revealed that he hired a dredger and managed to tap into a source of underground water.

“There was a dredger driver who tried (digging underground water) before, I asked him to come and I didn’t expect the water to come out after digging around 10 feet.”

Liew was amazed that the underground water was very strong.

“If we didn’t dig, how did we get water? After digging, wah, the water came out very quickly. Only then did we have enough to water our crops.

“I remember the whole month we pumped underground water to the farm pond, it was 24-hour non-stop pumping, but the water was always there and strong.” 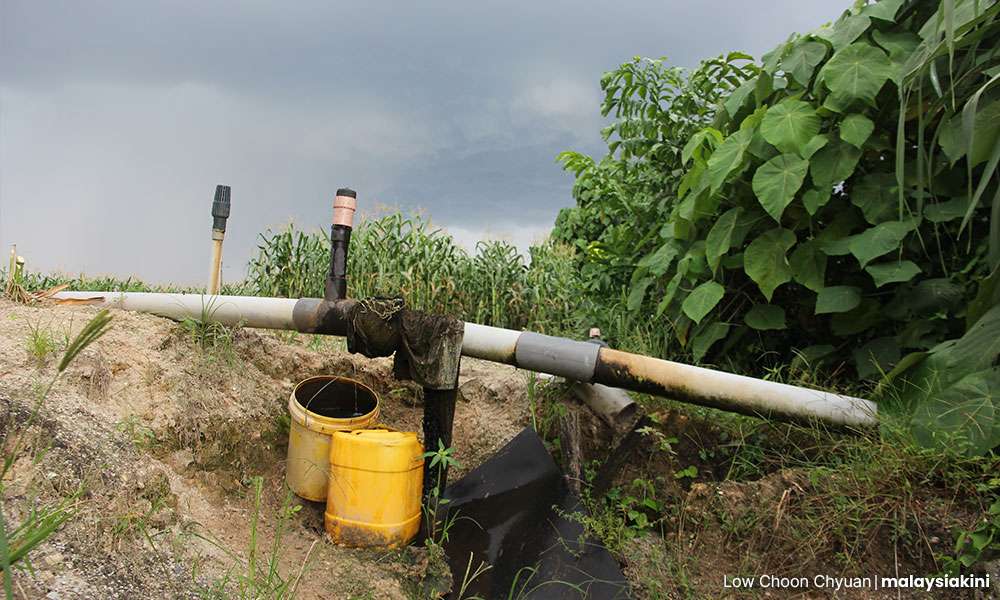 Liew knew that it was illegal, but he said he was just digging a small hole to sustain his crops.

“What could we do if we don’t have water?” he lamented. Liew said he stopped pumping water from underground when the rains came.

Water activist and former Klang MP Charles Santiago told Malaysiakini that there isn’t any national law or regulation on utilising underground water, adding this might lead to underground water pollution and corrosion.

In July 2019, then-water, land and natural resources minister Dr Xavier Jayakumar said the government was studying the best way to exploit groundwater resources, including drafting new regulations and laws in order to help the country face dry spells in the future.

Xavier revealed that the country is estimated to have groundwater reserves of around five trillion cubic metres, with only around three percent being used, and mostly in the industrial sector.

He further noted that Kelantan has used groundwater to supply domestic consumers and Selangor is channelling it to the industrial sector.

However, environmental activists have warned that tapping underground water could lead to landslides, sinkholes, insufficient drinking water and infertile soil.

‘The weather is unpredictable’

Liew has a lingering fear of drought, although the rainfall has been sufficient lately. “When it is a drought, many issues will happen,” he said.

The farmers are afraid that there will be another drought, and when it happens, the government will be too busy solving the nationwide water crisis instead of giving them any attention.

A report produced by the United Nation’s Economic and Social Commission for Asia and the Pacific (ESCAP) in 2020 forecasted that even if a less severe El Nino condition happens, some parts of Peninsula Malaysia will have extreme drought conditions between 2071 to 2100.

The farmers used to be familiar with the weather and its rain patterns, but it has been getting harder to predict in recent years. 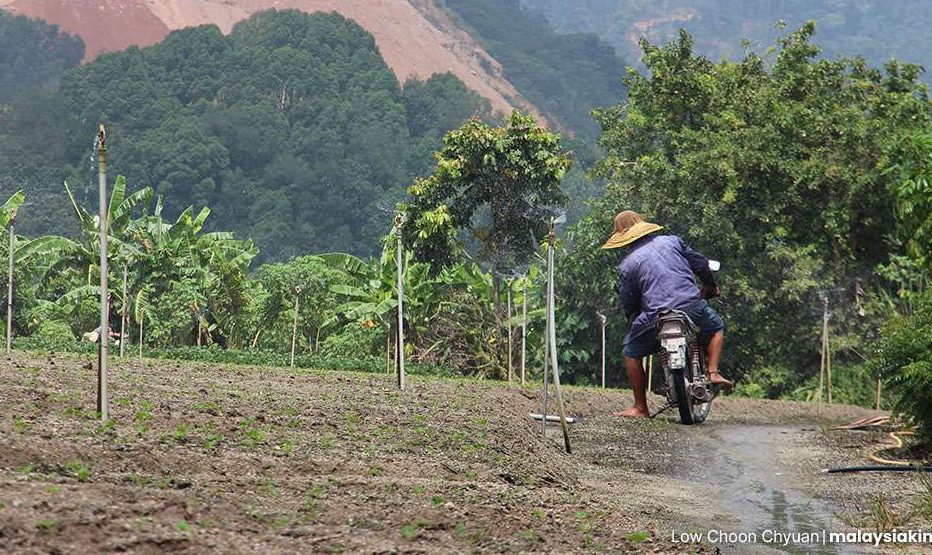 Chee Huat, who has been farming for more than 20 years, said that July used to be the rainy season, but nowadays the weather is “not accurate anymore, sometimes the rainy season drags on until August.”

“Sometimes it doesn’t rain. But when it rains, it is too much,” he said, explaining that too much rain dilutes the fertiliser. This would mean farmers have to use more fertiliser, which affects the quality of the harvest.

“The weather has changed a lot. Previously, when we worked on the farm, we wouldn’t stop, we continued working after lunch.

“But nowadays, it is too hot past noon. We will get sick if we keep working,” Chen said. 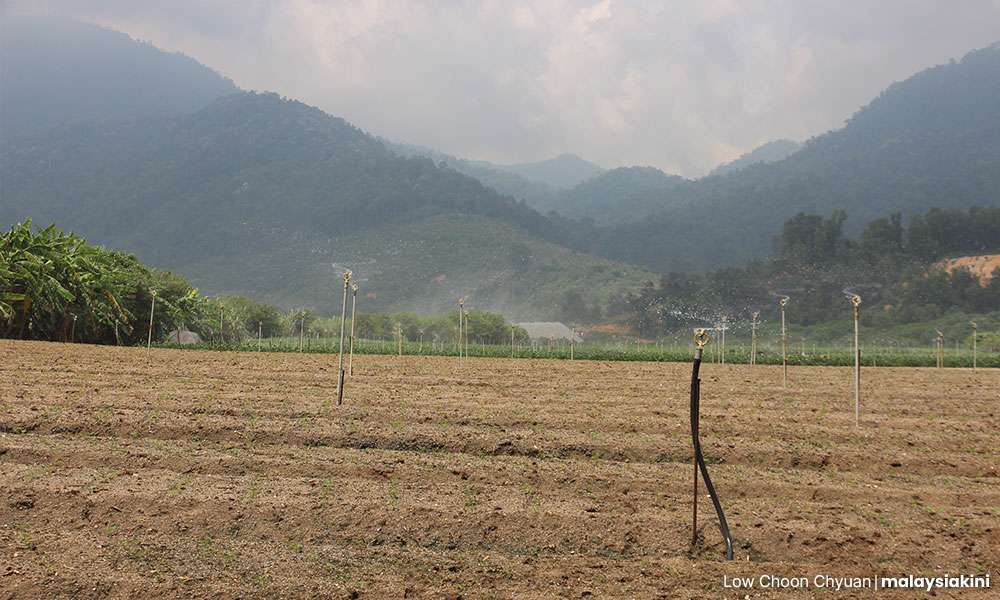 In April 2021, the then-environment and water minister Tuan Ibrahim Tuan Man claimed that Malaysia is not a country categorised as vulnerable to climate change.

Climate change might lead to a water crisis and food insecurity. And, as farmers struggle to sustain themselves, social conflicts and environmental damage, like in the 2020 drought, are more likely.

Last year, when the rainfall increased rapidly and many places in the peninsula were impacted by major floods, the nation realised that climate change is real and too close to us.

In fact, the cases illustrated in this article have shown that climate change has arrived earlier than that. Unlike last year’s major flood, those people and the lands that were impacted suffered quietly.