This story was originally published by The Independent, with the support of Climate Tracker’s COP27 Climate Justice Journalism Fellowship.

Activists say momentum at the so-called ‘implementation’ summit has been low.

Frustration among climate campaigners is mounting at Cop27 over the “empty words and promises” of global leaders to take real action to curb fossil fuel pollution and make binding financial commitments to climate compensation.

Loss and damage reparations for countries hit hardest by the crisis have been front and centre of the talks, but while many of the world’s top carbon-emitting countries have said they will consider contributing, none have said how much they would give as the first week of the global summit drew to a close.

Activists say momentum at the so-called “implementation” summit in Sharm el-Sheikh, Egypt, has been low, leaving developing countries sceptical about what the “Sharm” pact, where countries commit to taking action, will include.

It comes as president Joe Biden, who touched down in the Red Sea resort on Friday pledging to do more, was heckled by protesters for calling America a “world leader” on climate action.

He promised that the US will meet its emissions target by 2030 to do the country’s part in averting the “highway to climate hell” UN secretary-general Antonio Guterres warned of earlier this week, and said the US government was “putting our money where our mouth is”.

He said US spending, such as the new Inflation Reduction Act, would “change the paradigm” and ensure the US hits emissions targets. “Folks, we’re proving a good climate policy is a good economic policy. A strong foundation for durable, inclusive and resilient economic growth is driving progress in the private sector, is driving progress around the world,” he told the conference.

But climate activists and leading voices from the global south say it is not enough.

Theresa Rose Sebastian, a climate and social justice activist from India and Ireland, told The Independent: “My hopes are stagnant [for an agreement]. Because the world leaders aren’t listening to the frontline communities, they weren’t even present for the speeches.

“Biden himself missed the speeches of island countries of Tuvalu and Vanuatu who are watching their islands disappear. The bigger countries are still looking at the loss and damage part of this conference as charity when it should be historic responsibility for the emissions produced and it should not be led by just moral responsibility but legal liability.”

Mitzi Jonelle Tan, a Filipino climate activist who organised the Fridays for Future protest at Cop27 on Friday, said so far, the summit had lacked the “drastic action” and change needed to solve the climate crisis.

She said: “It’s the end of the first week yet it feels like nothing has happened. Only empty words and promises and world leaders getting more creative with the way they lie to us. There’s been some loss and damage finance, but not enough and still no finance facility.

“We’re not seeing any progress on the drastic emission cuts that we desperately need and still nothing on phasing out fossil fuels. The world leaders have a week left to get on track and ensure we’re closer to climate justice.” 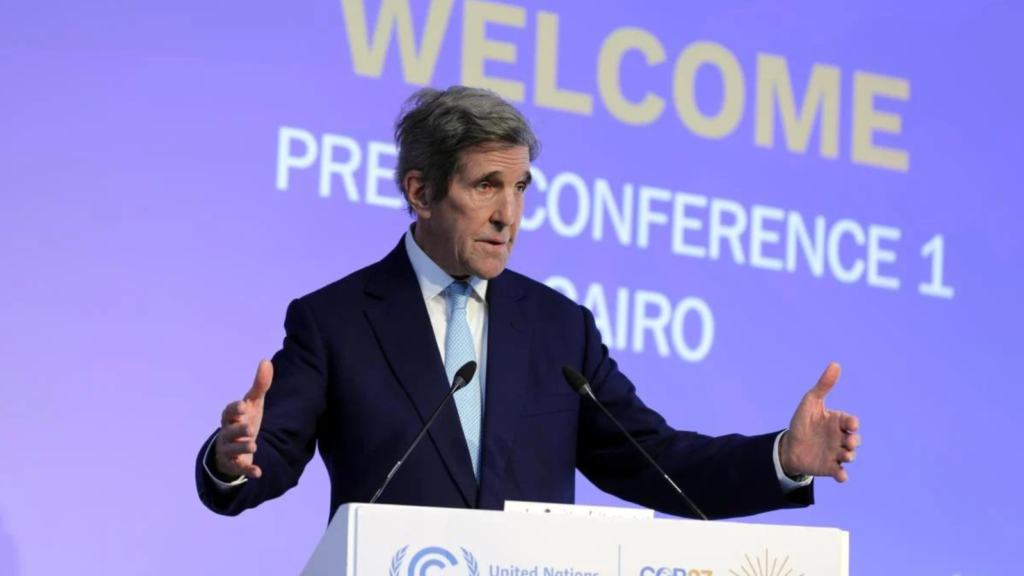 Tom Evans, of climate change policy group E3G, said that while there has been real leadership from vulnerable and developing countries around loss and damage, and the push to reform the multilateral development banks, the same could not be said of developed countries.

“Without climate finance in place, it’s hard for countries to deliver and to trust,’ he said.

Mr Biden only landed in Sharm el-Sheikh a few hours earlier and his stopover would be brief on his way to the G20. He came to Egypt to laud US action on climate after a suite of recently-passed climate-fighting legislation in the US – the Inflation reduction act, BIpartisan infrastructure Act and CHIPs.

But events had overtaken him – with loss and damage in the spotlight from the get-go at the conference – but no mention of it in his speech.

Loss and damage refers to the irrevocable losses of livelihoods and property to nature and cultural heritage as a result of the climate crisis.

Developing nations, facing the worst climate impacts despite their relatively small carbon footprints, are demanding that their large-polluting neighbours pay reparations for the fossil-fuel damage which has underpinned their wealth.

“The call for loss-and-damage funding at this conference has been louder than ever before, so it’s disturbing that Biden was silent on paying off the tremendous debt the United States owes as the world’s largest historical climate polluter,” Jean Su, energy justice director at the Center for Biological Diversity, told The Independent.

“If Biden really wants to ensure an equitable world, he needs to confront fossil fuels at home and establish a real plan to help those suffering from the climate calamity they did the least to create.”

Harjeet Singh, of the Climate Action Network, added:“The US has no right to call itself a climate leader. It may be doing things domestically but it cannot be a global leader because here being the biggest historical emitter, they have to come forward with good money and support setting up a mechanism. Here, there is nothing less that we expect from the US.”

And that funding is threatened by demands from other sources as countries arrived at Cop after a bruising year on the domestic front with climate action taking a back seat to the war in Ukraine, soaring inflation, and fuel and food shortages.

But the climate crisis is not going away and a series of reports have offered a reality check as to the scale of the problem the world faces. A new report launched by former US vice president Al Gore found that greenhouse gas emissions are as much as three times higher than reported to the UN.