Despite the presence of lush forests and surrounding waters, there is a lack of groups in Eastern Visayas that are focused on protecting these important ecosystems.

GUIUAN, Eastern Visayas — Joanna Sustento, a resident of Tacloban in Leyte, lost everything when Super Typhoon Haiyan hit the Philippines in November 2013. The cyclone, locally known as Yolanda, uprooted millions of people and killed thousands, including her family members.

A year after the tragedy, she met a group of climate activists who had walked from Manila to Tacloban to demand action from world leaders.

“Because of them, I began to realize that everything was taken away by that storm. But we gained powerful stories to tell—stories that can put a human face to the numbers and statistics of climate science,” Sustento said.

She has since used her voice to make people aware of the devastating impacts of climate change, and call for action and justice for communities.

But even before Haiyan altered the way residents view climate change, a group of concerned citizens from Homonhon Island in Guiuan town had been also working to fight climate change.

Billy Abueme, a local of the island, served as the leader of Hero Homonhon when it began in 1986. He started the movement in response to the consequences of climate change that they had been experiencing.

“The protection of the environment is one of our driving forces in the climate change movement. Second is our experience because of the [changes in] the environment in recent decades,” he said.

Abueme, now 54, hopes the younger generation will continue the fight against climate change. 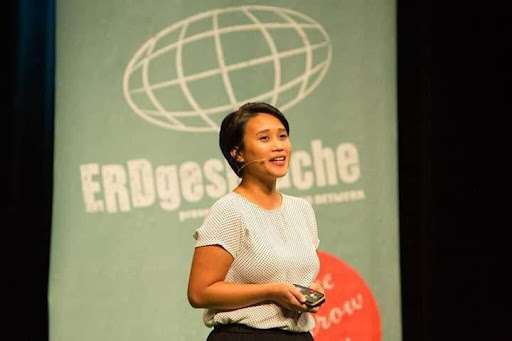 Joanna Sustento speaks in this photo.

Young people are least responsible for the warming of the planet and the loss of biodiversity, but they are the ones who are most affected by the consequences of these.

Many young people suffer from eco anxiety. They also deal with academic pressure, effects of the pandemic, and personal or family problems.

“However, despite it all, we see how the youth recognize their significant role in the fight against the climate crisis,” Sustento said.

“Over the last few years, more and more young people are speaking out and taking up space in both local and global platforms, because they realize that there is no future to look forward to if they take the backseat and let government leaders make decisions without their participation,” she added.

Some 257 Facebook users volunteer for climate groups in Eastern Visayas, mostly in Eastern Samar. There are roughly 20 environmental organizations in the region.

One of these groups is Lanang Youth Ecoscouts. It is a non-profit organization based in the third-class municipality of Llorente in Eastern Samar that focuses on the protection of Samar Island Natural Park (SINP). It was established in November 2021.

SINP is the country’s largest terrestrial protected area, covering three cities and 34 municipalities. Declared a protected area in April 2003, SINP also features one of the largest limestone formations in the Philippines.

The group was founded because there was no organization in the region focusing on environmental protection, and because Llorente is a part of the SINP.

Members of Lanang conserve and maintain the area’s upstream regions, as well as educate residents, especially the youth, about the importance of SINP.

Conserved habitats can remove carbon dioxide from the atmosphere and store carbon, as well as reduce the devastating impacts of climate change, including flooding.

“In the case of Eastern Visayas, this means that fighting for climate change advocacies mean fighting for environmental issues to preserve our existing ecosystem stock such as mangroves and seagrasses (such as in Kankabato Bay) which provide services such as protection from storm surge and food services for the local population,” said Dakila Yee, an assistant professor at the University of the Philippines Tacloban College. 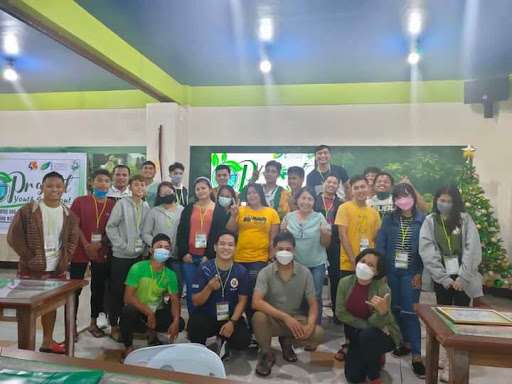 Members of Lanang Youth Ecoscouts pose for a photo.

But it is facing a number of challenges, one of which is the lack of funds needed to function. A P100 contribution is collected from each member, which is used to print and distribute flyers about SNIP. Lanang has 23 members.

The organization also deals with communication challenges. As members live kilometers apart and there is inconsistent internet availability in the municipality, they cannot hold meetings as frequently.

“Even if we have a lot of plans, we won’t be able to carry them out because we don’t have a budget… We have to travel to different barangays to hold a meeting, which is very difficult for us because the only way to get there is by boat,” said Adrian Aspa, who leads Lanang Youth Ecoscouts.

Despite the presence of lush forests and surrounding waters, there is a lack of groups that are focused on protecting these important ecosystems.

“I agree that the youth (and also adults) lose focus on biological diversity. Perhaps, one way to think about it is that we think of climate change as a human species problem, and so our solutions privilege humans—tide embankments, causeways, but we neglect to think about the spillover effect to non-humans,” Yee said. 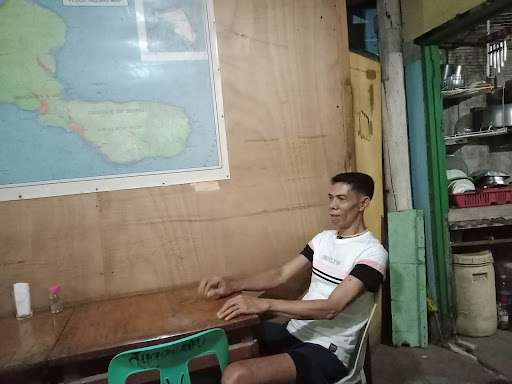 Aspa hopes his organization will help minimize illegal forestry operations in Llorente and produce more eco-advocates who will aid in the lobbying for the protection of biodiversity, especially in SINP.

Abueme of Hero Homonhon wishes that the younger generation will contribute to reducing the effects of climate change and encourage a shift in the way people live. He also hopes that the government will do its part in the climate fight.

“I hope that it will be sustained by the other generations to come because we cannot solve the climate problem in an instant. We wish that there will be second liners in every generation that would continue advocating for climate.”

Sustento echoed Abueme. “We should continue to find ways to continuously support and encourage the youth, because their leadership, willpower, and courage are qualities that current governments and world leaders should have.”