During a roundtable discussion organized by the Southeast Asian Energy Transition Partnership at COP27, Mr. Tang The Cuong, Director of the Department of Climate Change (Ministry of Natural Resources and Environment) restated Vietnam’s net zero emissions commitment by 2050.

He further emphasized the need for just energy transition in Vietnam, as well as joined the in-depth discussion about closing coal power plants in the region to achieve carbon neutrality by mid-century, and challenges facing Southeast Asian countries towards a future less dependent on coal power. 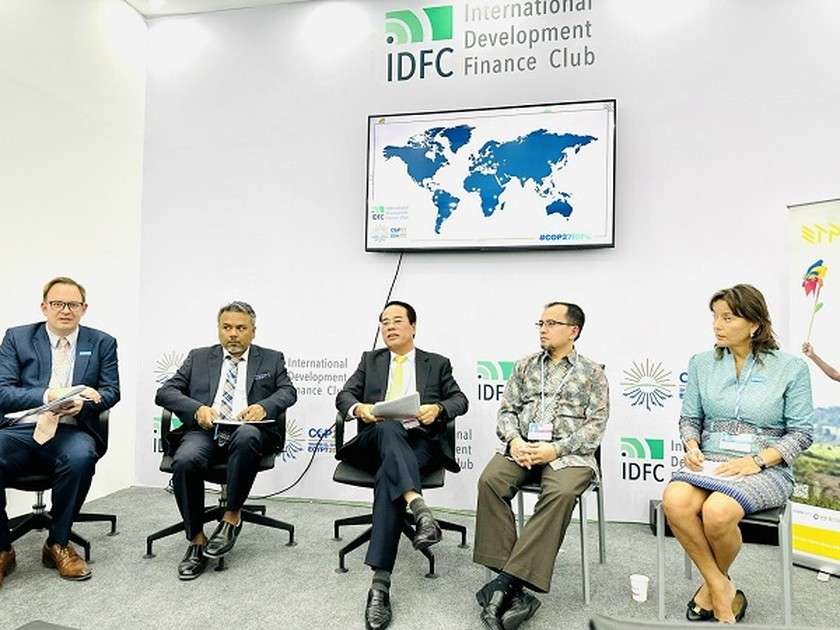 Vietnam has already issued a National Action Plan on Climate Change for the period to 2050 to reach net zero target. Vietnam also submitted the updated Nationally Determined Contribution (NDC) for 2022 which stated that the country can increase its total emission reduction contribution to 43.5% by 2030 compared to BAU (conditional contribution). The target was  27.0% in the NDC submitted in 2020.

Besides, Vietnam had a great potential for the development of offshore wind power, with the estimated potential reaching 600GW threshold.

Vietnam is in the process of negotiating with the G7 countries on the Political Declaration of the Just Energy Transition Partnership (JETP), and expects to complete the pact by the end of the year.

According to Bloomberg, following Indonesia and South Africa, Vietnam can access a climate financing package worth at least 11 billion USD to shift the energy economy from coal to renewable energy. Vietnam and its donor countries, led by the European Union and the UK, are aiming to announce the Just Energy Transition Partnership funding deal, which could total as much as $14 billion, at the EU-ASEAN summit on Dec. 14. Between $5 billion and $7 billion will come from public loans and grants, with the rest from private sources.

Before Vietnam, South Africa received an $8.5 billion aid package at the COP26 climate summit last year, while  Indonesia’s $20 billion pact was unveiled at the G20 summit in Bali (Indonesia) this week.

Vietnam is the third country to participate in the JETP negotiation, known as the largest financial package in the world to support developing countries whose economic sectors still depend mainly on coal to transition towards a low-carbon economy.

Julia Behrens, Asia Energy and Climate Project Manager of Friedrich Ebert Stiftung Vietnam, said that if Vietnam could move forward with the JETP, it will affect the current policies and laws, but it could also help to improve the legal settings for renewable energy.

“Hopefully, it could also help to improve the grid,” Behrens said.

According to the latest International Energy Agency (IEA) special report, the world must move quickly to reduce CO2 emissions from coal significantly to avoid severe impacts from climate change.

The report also highlighted six countries where coal dependencies are high and transitions likely to be most challenging: Indonesia, Mongolia, China, Viet Nam, India and South Africa stand out.

“Over 95% of the world’s coal consumption is taking place in countries that have committed to reducing their emissions to net zero. But while there is encouraging momentum towards expanding clean energy in many governments’ policy responses to the current energy crisis, a major unresolved problem is how to deal with the massive amount of existing coal assets worldwide,” said IEA Executive Director Fatih Birol.

“That the G20 recognised the need to cut emissions and limit warming to 1.5 should provide impetus to the governments gathered at COP27 to agree a similarly strong outcome. We now need the G20, the world’s biggest emitters, to do what they have committed to and make the necessary deep cuts in emissions, and importantly, stop subsidizing fossil fuels. We need that Just Transition to start now,” Hare commented.

On the challenges facing Vietnam to implement the JETP, Mr. Tang The Cuong addressed the lack of technologies for energy transition as the first difficulty.

It is highly necessary for Vietnam to cooperate with other countries to produce hydrogen energy or develop carbon capture, utilization, and storage (CCUS) technology.

In order to accelerate the process to achieve net zero emissions, Vietnam needs a great deal of resources and support from partners, especially financial partners to solve the problem of existing coal power plants with unfinished operational lifetime. A coal plant usually operates in between 30 to 40 years.

While wind and solar power capacity gradually increases over the years, the big problem is to compensate for the newly-built and operated coal power plants which will be closed early.

Mr. Cuong also added, especially the “just” part of the JETP, Vietnam must also find solutions to provide for workers in the coal industry who are forced to change jobs because of the coal phase-out process and must find other jobs to maintain their livelihood.